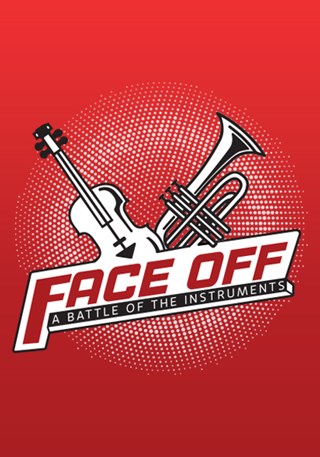 FACE OFF: A BATTLE OF THE INSTRUMENTS

Everyone’s favorite classical music competition is back! What happens when you combine the New World Symphony and American Idol? To find out, join New World Symphony and your host, hip-hop artist and DJ A Fly Guy, in a night that is equal parts contest and concert. Vying for the win this year are the bassoons, flutes, low brass, cellos, percussion and violins--who are determined to defend last year's title. Which instrument will win? You’ll decide, by voting on your favorite each round until the last instrument standing wins!

Click here for a recap of last year's inaugural competition, where the Violins were named Face Off winners!

Face Off is designed by Horn Fellow Corbin Castro and Clarinet Fellow Angelo Quail. Fellow-driven projects are sponsored in part by the Maxine and Stuart Frankel Foundation. Knight Foundation and New World Symphony: Reimagining Classical Music in the Digital Age

YOUR COMPETITORS, PERFORMING EXCERPTS FROM THE FOLLOWING PIECES:

A Fly Guy is a visionary, a dreamer and a burst of raw talent in the entertainment scene. Described as an Adult-Contemporary Hip-Hop Artist/DJ blending impeccable taste with a feel for the moment, Fly Guy channels his incomparable passion through his musical performances, bringing a surge of energy to any room he spins or performs in. With roots grounded in his homeland of Georgetown, Guyana (South America), Fly Guy’s hustle and determination has helped catapult him to the top of his industry in the U.S.

Once the self-taught talent got his start, there was no turning back.  He learned briskly and with ease, taking every gig as a learning opportunity; quickly becoming well-known for his masterful ability to connect to crowds. With his energetic presence fueling the motion on dance floors around the country, Fly Guy began to make a name for himself as a versatile, impassioned, top talent DJ.

Now a global sensation highlighted by an appearance on VH1’s “Master of the Mix” DJ reality tv show, it’s no wonder that the likes of Drake, Erykah Badu, A$AP Rocky, J Cole and Robin Thicke have chosen Fly Guy to curate the ‘soundtracks’ of their private events.  He’s made waves at appearances during Miami's Art Basel weekends year after year as well as playing in nationally-renowned festivals, and nightclubs from Tokyo to Switzerland, Asia, Canada, the Caribbean and South America; in addition to taking on the role as an official DJ for Copa America Centenario Soccer Tournament, deejaying in national athletic stadiums across North America.

Through all this, Fly Guy remains a Miami staple as one of the city’s premiere DJs, with residencies at LIV nightclub, STORY nightclub, and a slew of other hot spots. Outside of the nightlife, Fly Guy commits to dedicating his time to mentor the South Florida youth. While working in conjunction with various Non-Profit organizations Fly Guy has remained connected to community outreach by speaking to youth at local high schools and colleges as well as the TASK FORCE FOR GUYANA’s YOUTH, which is a non-profit based in South Florida that helps children in need in his home country of Guyana.

In an industry and a world where many choose to fake it until they make it, Fly Guy remains as genuine as they come.