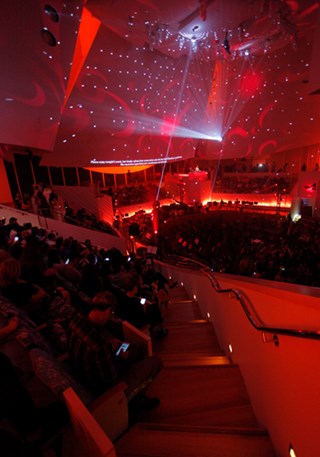 Late Night is back! Named Best Classical Music Experience by Miami New Times, our concert meets night club mashup includes club-style lighting and art videos. Stand up close and groove alongside the performers or arrive early to immerse your senses in the late-night lounge vibe from a seat upstairs. Composer Olga Neuwirth creates a “songplay in nine fits” in honor of her childhood idol Klaus Nomi, the glamorous German countertenor and queer icon who transformed the New York art world. Stepping into the shoes of the iconic singer who was a staple of New York nightclubs in the 70s is Jake Arditti. He’ll tackle Nomi’s pop songs and opera arias with sampled back-up vocals and a full orchestra. Join us to hear the fabulous music that went on to influence Bowie, Basquiat and Lady Gaga.

Matthias Pintscher is the Music Director of the Ensemble intercontemporain in Paris. In the 2020-21 season, he began a three-season appointment as the Cincinnati Symphony’s new Creative Partner. Known equally as one of today’s foremost composers, his works are frequently commissioned and performed by major international orchestras.

Mr. Pintscher opened his 2021-22 season as the “Theme Composer” of Suntory Hall’s 2021 festival, including the world premiere of his work neharot, which he conducted with the Tokyo Symphony. In January 2022, his violin concerto written for Leila Josefowicz, Assonanza II, was be premiered by the Cincinnati Symphony under Mr. Pintscher’s baton. This season he makes debuts with the Pittsburgh Symphony, Staatskapelle Dresden, Lahti Symphony and Musikkollegium Winterthur. He returns to the Houston Symphony, Indianapolis Symphony, Orchestre de la Suisse Romande, Barcelona Symphony, Orchestre Philharmonique de Radio France, Netherlands Radio Philharmonic Orchestra at the Holland Festival, Academy of the Berlin Philharmonic and the Boulez Ensemble. In recent seasons, Mr. Pintscher has begun to conduct staged operas, and in the 2021-22 will return to the Staatsoper Unter den Linden in Berlin to lead Lohengrin, for which he gave the production’s premiere the prior season.

Mr. Pintscher has held many titled positions, most recently as the BBC Scottish Symphony’s Artist-in-Association for nine seasons. During the 2018-19 season, he served as the Season Creative Chair for the Tonhalle-Orchester Zürich, as well as Artist-in-Residence at the Los Angeles Chamber Orchestra. He was Principal Conductor of the Lucerne Festival Academy Orchestra from 2016-2018.

Mr. Pintscher began his musical training in conducting, studying with Pierre Boulez and Peter Eötvös in his early 20s, during which time composing soon took a more prominent role in his life. Mr. Pintscher's music is championed by some of today's finest performing artists, orchestras and conductors. His works have been performed by such orchestras as the Boston Symphony, Chicago Symphony, Cleveland Orchestra, New York Philharmonic, Philadelphia Orchestra, Berlin Philharmonic, London Symphony Orchestra, Royal Concertgebouw Orchestra and the Orchestre de Paris, among many others. He is published exclusively by Bärenreiter. Mr. Pintscher has been on the composition faculty of the Juilliard School since 2014.

In 1976 Pierre Boulez founded the Ensemble intercontemporain with the support of Michel Guy (who was Minister of Culture at the time) and Nicholas Snowman.

The Ensemble’s 31 soloists share a passion for 20th- and 21st-century music. They are employed on permanent contract, enabling them to fulfill the major aims of the Ensemble: performance, creation and education for young musicians and the general public. Under the artistic direction of Matthias Pintscher the musicians work in close collaboration with composers, exploring instrumental techniques and developing projects that interweave music, dance, theater, film, video and visual arts.

In collaboration with IRCAM (Institut de Recherche et Coordination Acoustique/Musique), the Ensemble intercontemporain is also active in the field of synthetic sound generation. New pieces are commissioned and performed on a regular basis.

The Ensemble is renowned for its strong emphasis on music education: concerts for kids, creative workshops for students, training programs for future performers, conductors, composers, etc.

The Ensemble is financed by the Ministry of Culture and receives additional support from the Paris City Council.

Already a professional singer at the age of 11 when he sang Yniold in Pelléas et Mélisande for Glyndebourne Festival Opera and in several productions at English National Opera, Jake Arditti has had a meteoric rise to fame since his prize-winning performance at the 2012 Innsbruck Baroque Singing Competition.

Mr. Arditti’s extended vocal range has also seen him encompass such roles as Amore (Theater an der Wien and Zürich Opera) and Nerone in Monteverdi’s L’incoronazione di Poppea (Pinchgut Opera Sydney), as well as Nerone in Agrippina (Theater an der Wien and Göttingen Handel Festival). He sung David in Handel´s Saul (Theater an der Wien, a role debut in a new production directed by Claus Guth and conducted by Laurence Cummings. Mr. Arditti most recently sung the title-role in Robert Carsen’s production of Handel’s Rinaldo for Glyndebourne, as well as the title-role in Corselli’s Achille in Sciro conducted by Ivor Bolton and directed by Mariame Clément at the Teatro Real Madrid.

On the concert platform, Mr. Arditti has displayed a similarly remarkable versatility, from Ernesto in Vinci’s Gismondo, re di Polonia (Vienna, Moscow, Dortmund and Bayreuth), Contre-ténors with Il Pomo d’Oro (Sablé and Nice) and From Soul to Soul with the Pera Ensemble (Heidelberg and Cologne), to Pergolesi’s Stabat Mater under Ivor Bolton, or the premieres of Hilda Paredes’ Canciones Lunáticas and Sciarrino’s Cosa Resta with the Arditti Quartet in numerous other venues on both sides of the Atlantic. Most recently he performed Olga Neuwirth’s Hommage à Klaus Nomi along with the Ensemble intercontemporain (Philharmonie in Paris and Cité de la Musique in Strasbourg).