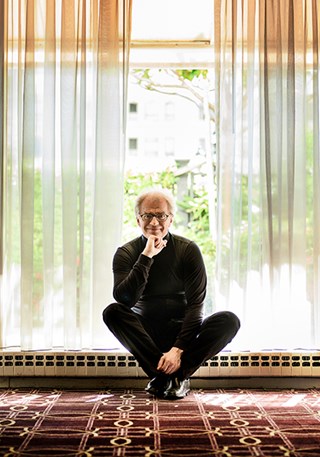 After studying at the Sibelius Academy in her native Helsinki, Kaija Saariaho settled in Paris, where experiments with cutting-edge music technology fueled her expansive, color-drenched scores. The premiere in 2000 of her first opera, L’amour de loin (Love from Afar), vaulted Saariaho into the upper echelon of international composers, and the cross-cultural love story has proved to be one of the very rare modern works to stay active in the repertory, including a new staging at the Metropolitan Opera.

Soon after composing that opera, with its enormous but breathtakingly transparent orchestra, Saariaho wrote her largest work to date for orchestra alone. Orion, commissioned by The Cleveland Orchestra, examines the mythological hunter and the constellation that bears his name in three movements. The middle movement, Winter Sky, situates the music in the season when Orion is most visible in the northern hemisphere. Saariaho arranged the movement in 2013 as a standalone work.

The icy stillness and austere solos, starting with piccolo, show Saariaho to be an heir to Sibelius in evoking the pristine Nordic winter. But the characteristic that really sets her apart is the detailed sound painting in the barely audible background—in this case using two harps, piano, organ, muted strings and metallic percussion, with no sound marked louder than pianissimo.

As the orchestral textures thicken and elongate, the three-note motive first articulated in the opening piccolo solo becomes a mantra, until it feels like every sound is a transformation of that simple pattern that leans down a half-step and then drops again, down a minor-third.

Concerto in A minor for Piano and Orchestra, Op. 54 (1845)
Approximate duration: 30 minutes

Robert Schumann’s own self-assessment, as of the age of 20, was that his “talents as musician and poet are at the same level.” He soon committed to a life in music, and he organized his life in Leipzig around piano lessons with the distinguished teacher Friedrich Wieck. Schumann’s fanatical practice regimen, combined with his ill-advised use of a finger-strengthening device, resulted in permanent damage to his right hand, but at least there was a silver lining to his aborted piano career: Schumann came to know his teacher’s daughter, Clara, a gifted prodigy who would become his wife 12 years after they first met.

After many false starts and failures, Schumann finally made headway in composing for the orchestra in 1841, when he completed two symphonies and a three-movement “Symphonette” (later recast as the Overture, Scherzo and Finale), plus a Phantasie for piano and orchestra designed as a feature vehicle for his wife. Clara, more than eight months pregnant, read through the single-movement work that August at a private session with the Leipzig Gewandhaus Orchestra, conducted by their friend Felix Mendelssohn. With the addition of two more linked movements, the Phantasie expanded in 1845 into Schumann’s first and only Piano Concerto.

The opening movement comes with an unusual tempo marking—Allegro affettuoso, meaning “fast and affectionate.” After a stabbing entrance, an oboe leads a wind chorale in a melody that descends tenderly to the repeated keynote. Those first four notes, C-B-A-A, are rendered in German as C-H-A-A, thereby spelling Chiara, the Italian equivalent of Clara. This encoded tribute to his wife suffuses Schumann’s first movement, and it makes a significant appearance later in the Concerto.

To answer the four-note descent of the “Chiara” theme, the central Intermezzo responds by arriving with an exchange of four rising notes, a device that immediately unifies these sections composed four years apart from each other.

In a contrasting passage, the cellos swoon through a big, romantic melody while the piano comments in the margins.

A clever transition pivots from the four-note upward segments back to the “Chiara” theme, which then accelerates into the lively new pulse of the finale. Coming from a composer who was neither a piano virtuoso nor a natural-born creator of large-scale compositions, this marvelously cohesive Concerto is a testament to Schumann’s hard-earned union of heart and craft.

Felix Mendelssohn was one of music’s most remarkable prodigies, creating immortal compositions while still a teenager. At twenty, he performed on a typical rite of passage for well-heeled young men, embarking on a “grand tour” of Europe. With extended visits to the British Isles and Italy, Mendelssohn expanded his worldview and brought home inspiration for future projects.

The first germ of musical material for a “Scottish” Symphony emerged on July 30, 1829, when Mendelssohn and a friend visited Holyrood Castle in Edinburgh. Mendelssohn was struck by the gloomy, crumbling palace, especially a chapel he described in a letter home: “Now roofless, grass and ivy grow there, and at the broken altar Mary was crowned Queen of England. Everything around is broken and moldering and the bright sky shines in. I believe I have found today in that old chapel the beginning of my Scottish symphony.” He soon sketched the elegiac melody that would serve as the theme of the introduction.

Mendelssohn struggled to recapture the misty mood of Scotland when he revisited his sketches during a subsequent winter in Rome, and so he set the symphony aside for over ten years, meanwhile writing two other symphonies, the ones labeled as No. 4 (“Italian”) and No. 5 (“Reformation”). Upon completing the “Scottish” Symphony in 1842, he conducted it in Leipzig and then in London, and he published it with a dedication to Queen Victoria.

After the introductory image of Queen Mary’s decrepit castle, the fast body of the movement elaborates lively rhythmic patterns that resemble Scottish jigs.

In the interconnected plan of the “Scottish” Symphony, each movement avoids coming to a full stop, and so the first movement’s coda swells into a disorienting squall before receding into a reminder of the introduction that ends with two gently plucked chords.

The Scherzo enters immediately with a call to attention and a reeling clarinet melody that may have been inspired by a bagpipe contest Mendelssohn heard in Scotland.

The next movement, again entering without a pause after a series of plucked chords, is a gorgeous song without words. One theory speculates that this music is meant to evoke Scotland’s Sir Walter Scott and his poem The Lady of the Lake, in which a girl sings the Ave Maria hymn accompanied by a harp (rendered here by plucked strings). It really does seem like the melody that enters after a short introduction begins with the unspoken words “Ave Maria,” the start of the Latin hymn.

As the slow movement’s last lingering A-major chord dies away, the finale stomps in with a militaristic new theme in A minor, set in a quick a tempo that Mendelssohn initially labeled as Allegro guerriero (fast and warlike).

The ferocious music slinks away, and a majestic conclusion in the major key rises up to bring the symphony to a spirited close.

Music Director of the Minnesota Orchestra for 15 years, Osmo Vänskä has led the Orchestra on five major European tours, as well as an historic trip to Cuba in 2015, at the invitation of the Cuban Ministry of Culture— the first visit by an American orchestra since the two countries announced steps to re-establish diplomatic relations. In 2018 he returned with the Orchestra to the BBC Proms before embarking on a five-city tour to South Africa as part of the world-wide celebration of Nelson Mandela’s Centenary. The tour, which marked the first by an American orchestra to the country, drew together South African and American performers featuring musical expressions of peace, freedom and reconciliation.

Other key highlights of his tenure with the Minnesota Orchestra include 17 album recordings (winning a Grammy Award in 2014 for Best Orchestral Performance for their second Sibelius album and being nominated in 2018 with the recording of Mahler’s Symphony No. 5), initiating and conducting the annual Future Classics concert, and various educational and outreach projects in Minneapolis and other cities.

In great demand as a guest conductor, Mr. Vänskä’s 2018-19 season includes re-invitations to the Chicago and New World symphonies and Seoul Philharmonic, and a return to China to work with Shanghai Symphony, and the China, Hangzhou and Hong Kong philharmonic orchestras. In Europe he makes one of his regular appearances with Helsinki Philharmonic and conducts the Deutsches Symphonie-Orchester Berlin, Netherlands Radio Philharmonic, London Philharmonic and Iceland Symphony orchestras.

A distinguished recording artist, primarily for the BIS label, Mr. Vänskä’s most recent recordings are of Mahler Symphonies Nos. 5 and 6, with the Minnesota Orchestra, followed by Symphonies Nos. 2 and 1, continuing the cycle dedicated to the composer. With Minnesota he has recorded the complete Beethoven and Sibelius symphony cycles, also for BIS, to rave international reviews, while recordings of Beethoven’s piano concertos with Yevgeny Sudbin have also garnered worldwide praise, including Grammy and Gramophone Award nominations.

Mr. Vänskä studied conducting at Finland’s Sibelius Academy and was awarded first prize in the 1982 Besançon Competition. He began his career as a clarinetist, occupying, amongst others, the co-principal chair of the Helsinki Philharmonic Orchestra. In recent years he has enjoyed a return to the instrument, including regular chamber music performances and a 2012 recording of Kalevi Aho’s chamber works.

Mr. Vänskä is the recipient of a Royal Philharmonic Society Award, the Finlandia Foundation’s Arts and Letters Award and the 2010 Ditson Award from Columbia University. He holds honorary doctorates from the universities of Glasgow and Minnesota and was named Musical America’s 2005 Conductor of the Year. In 2013 he received the Annual Award from the German Record Critics' Award Association for his involvement in BIS’s recordings of the complete works by Sibelius.

“One of the most admired pianists of his generation” (The New York Times), Inon Barnatan is celebrated for his poetic sensibility, musical intelligence and consummate artistry. He inaugurated his tenure as Music Director of California’s La Jolla Music Society SummerFest in 2019.

Mr. Barnatan is a regular soloist with many of the world’s foremost orchestras and conductors. He recently served for three seasons as the inaugural Artist-in-Association of the New York Philharmonic and recreated Beethoven’s legendary 1808 concert with the Cincinnati Symphony.