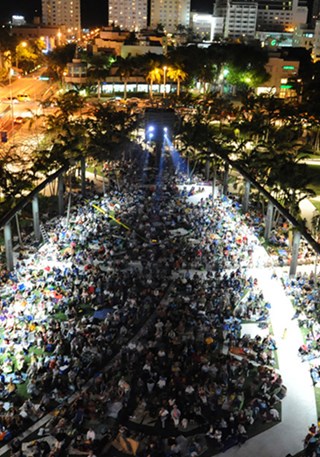 Go Team Miami—together we did it! Gather in SoundScape Park for #Project305, a community celebration culminating in the world premiere of Miami in Movements, the crowd-sourced symphony and film you and fellow Miamians helped create by sharing over 1,050 reflections on life in our community. The performance will also feature performances by local artists Picadillo, The Barry Bucaneiros and a special gospel choir with vocalists from three local choirs, under the direction of Dr. Nelson Hall.

Start the celebration early with free tours of the New World Center, pre-concert chats with the Project 305 artistic team and live performances by local artists SoundScape Park before the concert.

Schedule of Project 305 events subject to change. In the event of inclement weather, Citi will distribute a limited number of ponchos (first-come, first-served) throughout SoundScape Park.

Join the WALLCAST® Concert Club, Presented by Citi, to receive the latest updates on Project 305!

LEARN MORE: To learn more about Project 305 and view all submissions, visit www.project305.org.

WEATHER: In the event of inclement weather, the WALLCAST® concert featuring Project 305 will be shown at a later date to be announced.

This concert is sponsored in part by Micky and Madeleine Arison Family Foundation and William Strong.

Ted Hearne (b. 1982) and Jonathan David Kane (b. 1984)
Miami in Movements (2017; world premiere of NWS commission)
Out of the swamp….
The Neighborhood Game
Pocket here, pocket there
Closer than family
Ode to that Miami bass
A canary in the coal mine

Ted Hearne is a composer, singer and bandleader noted for his “pan-stylistic freedom” (Pitchfork), “wildness of spirit” and “fresh and muscular” music (The New York Times), who “writes with such technical assurance and imaginative scope” (San Francisco Chronicle).

The New York Times included Mr. Hearne’s oratorio The Source on its list of the best classical vocal performances of 2014, and (along with The New Yorker and The Nation) the best albums of 2015. Alex Ross wrote in The New Yorker "Hearne's piece holds up as a complex mirror image of an information-saturated, mass-surveillance world and remains staggering in its impact." Pitchfork called The Source "some of the most expressive socially engaged music in recent memory—from any genre." Law of Mosaics, Mr. Hearne’s 30-minute piece for string orchestra, was recently performed by the Chicago Symphony and San Francisco Symphony, and the recording of it was named by The New Yorker’s Alex Ross as one of the most notable albums of 2014. His newest album, Sound from the Bench, featuring Philadelphia’s acclaimed choir The Crossing and released this year on Cantaloupe Music, was praised in The New Yorker: “Hearne has forged a fierce and timely grace.”

Mr. Hearne performs with Philip White as the vocal-electronics duo R WE WHO R WE, belongs to the composer collective Sleeping Giant, and recent collaborations have paired him with legendary musician Erykah Badu. An active recording artist, his albums Katrina Ballads, The Source and Outlanders are available on New Amsterdam Records.

Mr. Hearne is the recipient of the Gaudeamus Prize and the New Voices Residency from Boosey & Hawkes. He recently joined the composition faculty at the University of Southern California. Recent and upcoming works include commissions from the San Francisco Symphony, eighth blackbird, A Far Cry, Ensemble Dal Niente, Roomful of Teeth and an evening-length work written in collaboration with poet/performer Saul Williams for the Los Angeles Philharmonic. For more information, visit www.tedhearne.com.

Jonathan David Kane is an artist and filmmaker from Miami. His work as a film director, producer, editor and cinematographer has screened at festivals and museums worldwide, including Toronto International, Sundance, SXSW, Rotterdam, Clermont-Ferrand, Sheffield Doc Fest, the Centre for Contemporary Arts in Glasgow, Contemporary Arts Center New Orleans, the Brooklyn Museum, the Museum of Modern Art in New York and CERN in Geneva. His 2015 documentary film Papa Machete “boasts lush cinematography” (OkayAfrica) and “resembles a graceful dance” (NPR). The film was recently released digitally via National Geographic and on The Atlantic Selects.

Mr. Kane has previously worked with the New World Symphony and Michael Tilson Thomas on the creation of several experimental performance films documenting Making the Right Choices: A John Cage Centennial Celebration. He is a winner of the Haskell Wexler Cinematography Award, a Knight Arts Challenge grant recipient, an alumni of the Berlinale Talents program and a co-founder of Miami’s Borscht Corporation.

The band’s name (pronounced peeka-deeyo) was inspired by a Latin-American dish that mixes many flavorful ingredients, reflecting the way in which the band blends different styles of music.

Picadillo’s sophomore album, released in 2016, is entitled El Manicomio and features rare traditional instruments such as the tres, the marimbula and the órgano oriental.

The Barry Bucaneiros are an explosive, carioca-style, student-based bloco modeled after those found in Rio de Janeiro. Founded at Barry University in 2013, the group uses the traditional instrumentation of an escola de samba, but in a more compact format. Blocos, like the Bucaneiros, can vary in size from five to 50 drummers, but unlike their larger escola de samba counterparts (which may have upwards of 350 drummers per group) a bloco is not obligated to stick to the escola’s thematic anthem, or enredo, and as such is a fertile setting for musical experimentation.

The group’s director, Brian Potts, is both a Miami resident and an active member of the Rio de Janeiro musical community. The inspiration for the Bucaneiros is a result of his close collaboration with Gabriel Policarpo, with whom he founded PRD Mais, a supergroup of up-and-coming percussionists living in Rio de Janeiro. Their new album Rittenhouse will soon be released on Snarky Puppy’s label, GroundUP Music. In addition to this work, Mr. Policarpo also runs a student-based bloco called Batuquebato, in which he uses the traditional samba school instrumentation to play not only samba, but a wide variety of grooves from both the Afro-Brazilian lexicon and various styles from around the world.

Like Batuquebato, the Bucaneiros’ performances are unscripted and guided by the director’s musical taste and command of a vocabulary of drum calls and hand signals developed and refined in rehearsals. There is no sheet music—all of the music you hear was developed and arranged by the group. The students reflect Barry University’s diverse population and bring with them influences and styles that become fodder for the group’s act, so while the ensemble’s roots are based in samba, they also play forró, maracatu, calypso, hip-hop, North Mississippi drum and fife--and whatever else makes people dance!

Tonight’s choir consists of members of Miami Temple Seventh-day Adventist Church, Church of the Open Door and students from Florida Memorial University, whose vocal program specializes in the oral musical traditions of the African Diaspora. Leading the choir is Dr. Nelson Hall, a Cuban native and University of Miami graduate, who serves as Assistant Professor of Music and Director of the Church Music Program at Florida Memorial University, and Music Minister of Church of the Open Door.

Dr. Hall’s continuing commitment to the music of the African Diaspora is a distinguishing point in his career. He has established a deep connection with African-American and Latin composers, and counts among his profound musical inspirations musicians such as conductor and composer Maestro Alfredo Munar and internationally acclaimed choral conductors Dr. Lee Kjelson and Dr. André Thomas.