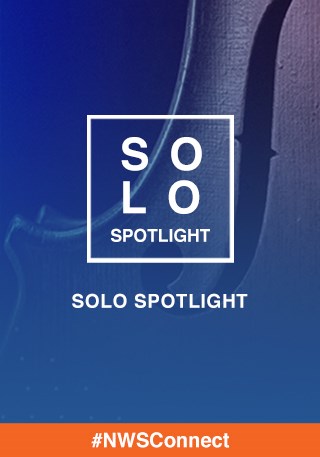 Through war and crisis, composers like Brahms and Janáček gave birth to beautiful sonatas for violin and piano. Violin Fellow Yada Lee has connected with these emotional works throughout her career and invites you to make your own connection during her performance of both.

Solo Spotlight: Love and Turmoil is an NWS BLUE project. Fellow-driven projects are sponsored in part by the Maxine and Stuart Frankel Foundation.

Selections from Porgy and Bess (1944)

"Bess, You Is My Woman Now"
"It Ain't Necessarily So"

Yada Lee is a third-year Violin Fellow at the New World Symphony. Avid recitalist and chamber musician, Ms. Lee has given recitals at the Beethovenfest in Germany, Tongyeong International Music Festival in South Korea, Green Mountain Chamber Music Festival in Vermont, Mazzoleni Hall and Richard Bradshaw Amphitheatre, Toronto. Dedicated to the betterment of society, she has given countless benefit concerts for charitable organizations in Thailand.

Winner of numerous awards and competitions, Ms. Lee has been a prize laureate at the Concerto Competition at Mannes School of Music, first prize at the Beethoven National String Competition Thailand, and is a grant recipient from the New York Foundation for the Arts, Peter M. Gross Fund and the Late Princess Galyani Vadhana Foundation. She made her New York solo debut at Lincoln Center’s Alice Tully Hall in 2014, performing Prokofiev Violin Concerto No. 1.

Ms. Lee played with the Canadian Opera Company Orchestra in the 2015-16 season, has been a member of the Bangkok Symphony since 2008 and a member of the Verbier Festival Orchestra. In the past seasons, she has performed under the batons of conductors Charles Dutoit, Iván Fischer, Valery Gergiev, Manfred Honeck, Zubin Mehta, Esa -Pekka Salonen, Gábor Takács-Nagy, Johannes Debus, Michael Tilson Thomas, among many others.

Born and raised in Bangkok, Thailand, Ms. Lee holds a master’s degree from Mannes School of Music, a bachelor’s degree in violin performance from Oberlin Conservatory of Music, and an artist diploma from The Glenn Gould School of The Royal Conservatory. Ms. Lee studied with Paul Kantor, Barry Shiffman, Laurie Smukler and David Bowlin. She is a keen opera lover and a fan of the Metropolitan Opera.

Hong was the winner of the 2017 Vendome Prize at Verbier, and received Second Prize at the 2017 International Beethoven Competition Vienna. He also was a finalist in the 2018 International German Piano Award, and 2017 American Pianists Awards.

On the roster of Young Steinway Artists since 2010, Hong has been featured as a guest soloist with the ORF-Vienna, Milwaukee, Indianapolis, Camerata New York, Fort Worth, Richardson, Racine, Waco, Galveston, and Brazos Valley Symphony Orchestras. He has performed in prestigious venues such as Carnegie Hall’s Weill Hall, Lincoln Center’s Alice Tully Hall, the Vienna Musikverein, Église de Verbier, Merkin Hall, and the Kennedy Center.

A prolific arranger of chamber music and orchestral works, Hong's arrangements have been performed all over the world, including in Italy, England, Finland, Hungary, and Hong Kong. He organizes annual tours of these arrangements through his own agency, Subito Arts.

Wesley Ducote is a third-year Piano Fellow at the New World Symphony. He has led a versatile musical career pursuing a diverse set of interests.

As a collaborator, Mr. Ducote has been featured with many of today’s brightest stars including composer/vocalist Kate Soper, Emmy Award-winning composer and Vietnamese folk musician Van Anh Vo, flutists Leone Buyse and Carol Wincenc, soprano Ana Maria Martinez, and many others. He has served as principal keyboardist with the Shepherd School Symphony and Houston Grand Opera Orchestra. As a chamber musician he has been a featured artist with MUSIQA and the Nantucket Rossini Club, and in 2017 was selected by the Shepherd School of Music to perform with the Gyldfeldt quartet from Leipzig. Mr. Ducote has even worked as a keyboardist/composer in his own jazz-fusion sextet Steve Cox’s Beard.

An enthusiastic performer of new and contemporary music, Mr. Ducote has premiered over 40 new works and worked with faculty at institutions in China, South Korea, Canada and all over the United States. His new music experience includes works for solo piano, chamber ensembles, orchestra and even a piano concerto written for him. He is currently working on an upcoming commissioning project of new solo piano music.

Mr. Ducote is an Artist Fellow with the Louis Moreau Institute and was a Young Artist Fellow with Da Camera of Houston, Resident Piano Fellow with the Cortona Sessions for New Music, and a fellow with CPI at the Composer’s Conference, SICPP, Encore Chamber Music, Round Top Festival Institute and Aspen Music Festival. Mr. Ducote holds graduate and undergraduate degrees in music from Rice University, where he studied with Brian Connelly, as well as an undergraduate degree in mathematics.