Spectral Sounds: The Real World in the Symphony, Part I

A series of free, streamed performances, curated by Horn Fellow Scott Leger and partnered with an interactive online concert museum, that allows the audience to engage with music and sounds featured on the program. Part I focuses on music inspired by bird calls. Part II on April 15 will feature music that is inspired by nature water. Part III on May 6 will focus on the world's "unnatural" sounds.

Spectral Sounds is a series of free online performances exploring the real-world sounds that inspired composers to adapt and emulate in their music for the concert hall. Through both new recordings and NWS archival performances, you’ll learn how composers throughout history approached this goal and see how they fit nature’s music into their own style. Throughout the 20th century, new developments in technology allowed composers to analyze the full audio spectrum of these sounds and orchestrate birdsongs, crashing waves and acoustic phenomena with ever-increasing fidelity. From the early Baroque to the most modern compositions, these spectral sounds have always been present.

The first “Spectral Sounds” livestream features the music of birds and demonstrates the variety of ways composers used birdsong as inspiration for their works. Featuring music by Ludwig van Beethoven, Heinrich Ignaz Franz von Biber and Olivier Messiaen, you’ll hear from the nightingale, cuckoo, wood lark, and even frogs and cats too!

Spectral Sounds: The Real World in the Symphony is an NWS BLUE project. Fellow-driven projects are sponsored in part by the Maxine and Stuart Frankel Foundation.

I. Awakening of Cheerful Feelings upon Arrival in the Country: Allegro ma non troppo

One of his few programmatic works, Beethoven’s Sixth Symphony explores the sounds and feelings of being in nature. Each of the five movements of the Symphony has a subtitle printed in the score to describe the narrative and emotions of the music. The piece begins with the “Awakening of cheerful feelings on arrival in the countryside;” there’s a “Merry gathering of country folk,” even a thunderstorm, ending with a shepherd’s song depicting “cheerful and thankful feelings after the storm.”

However, the second movement, the “Scene by the brook” includes some of the most direct references to nature in the entire symphony, and in classical music as a whole. Not only does the music itself paint a picture of a brook rolling through a meadow, but Beethoven includes text in the score to describe the various birdsongs that are featured in the movement’s closing cadenza. 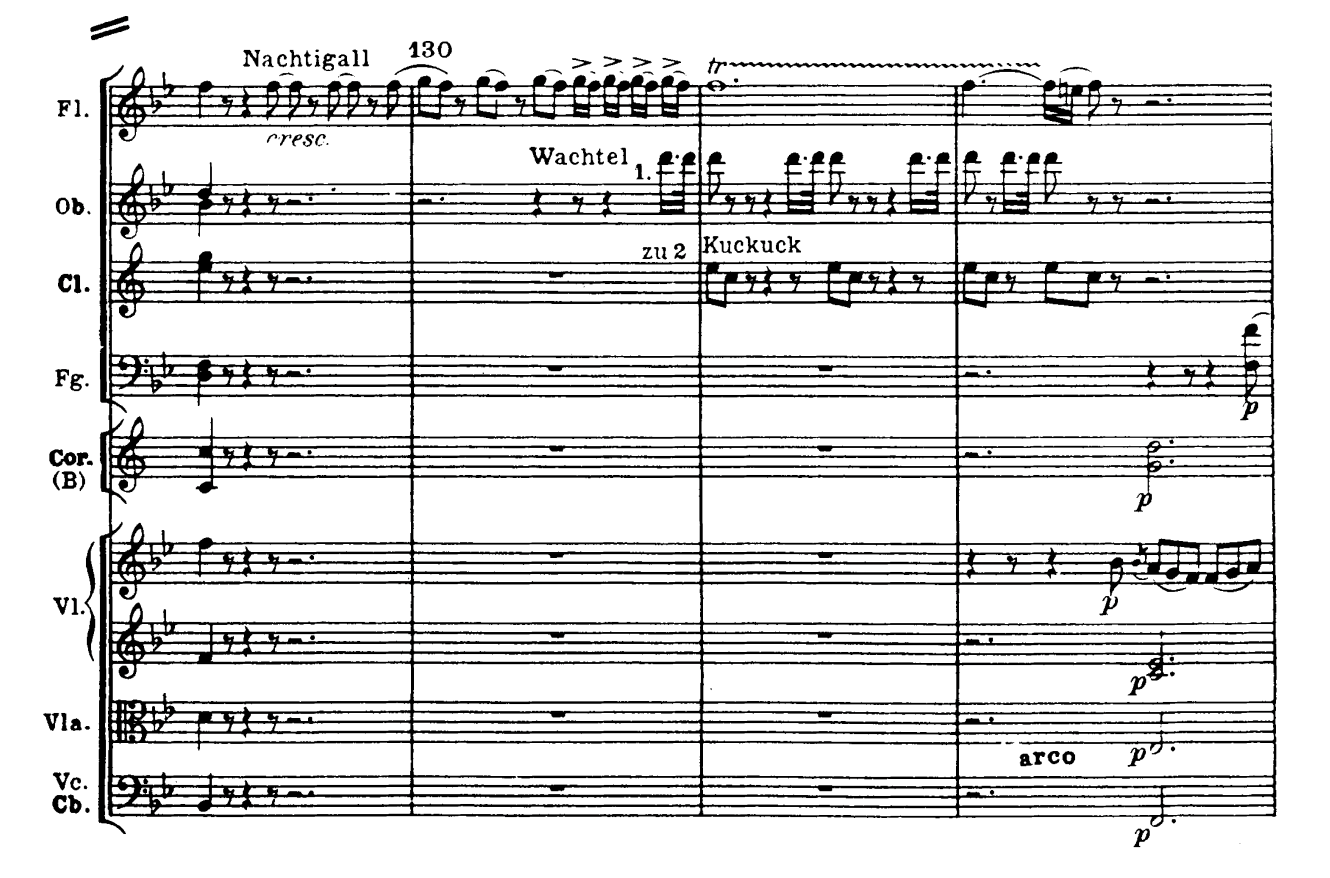 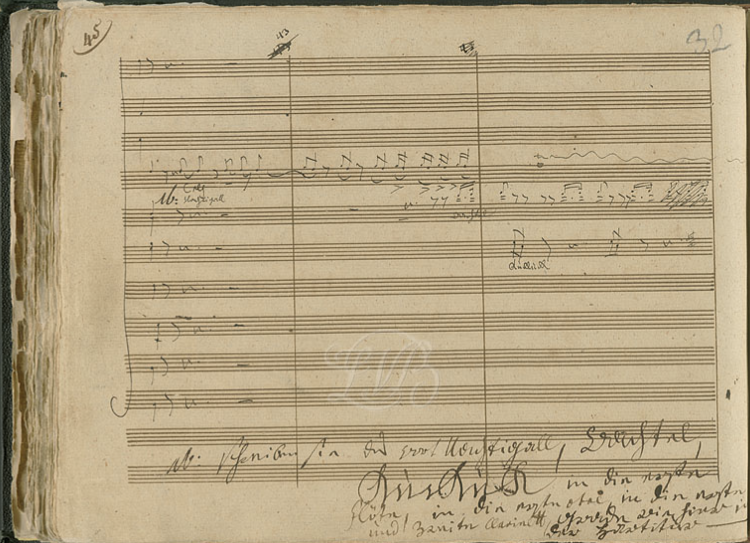 The flute in this excerpt plays a trill, represented the nightingale. The oboe’s dotted rhythm represents the quail (interestingly,  Biber uses the same rhythm in his Sonata representativa to depict the same bird), and the clarinets together imitate the cuckoo. But the detail that Beethoven includes the names of the bird, printed in the score should not be understated. By including this text, Beethoven stepped away from symbolizing or evoking nature, instead implying that each woodwind is the bird it represents. It’s as if the birds didn’t show up for the gig, and the orchestra is having to substitute.

Whether Beethoven was successful at imitating these birdsongs, or frankly whether he even cared to do so accurately, is another question entirely. The depiction of the quail’s rhythm is spot on, and the major-third interval of the clarinet approximates the cuckoo well, but the nightingale is a much more...simplified rendition of the complex birdsong.

This movement is called “Scene by the brook,” and while Beethoven represents the brook more symbolically than he does the birdsongs, there are still a few ingenious orchestration decisions that make the audience feel like they are being carried through the music by the steady flow of this stream. 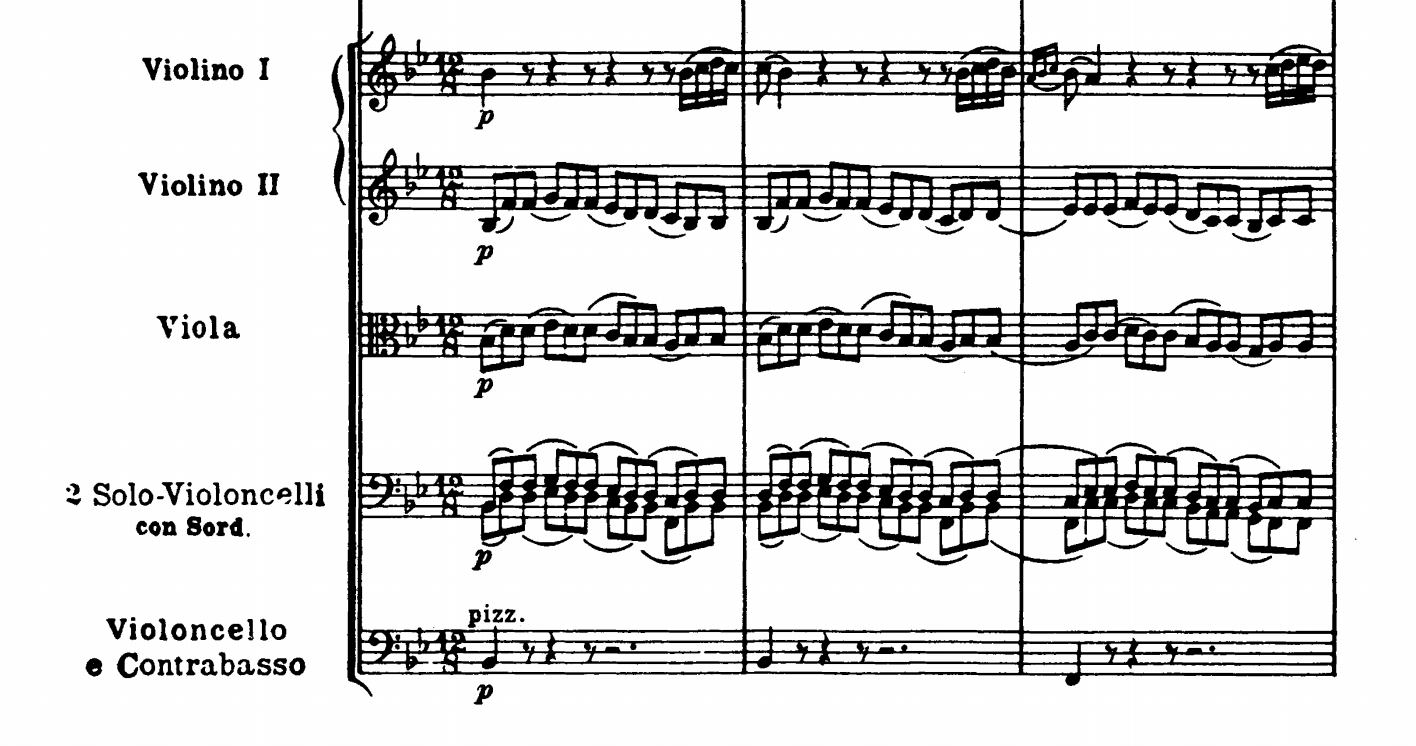 Both the key of this movement, B-flat major, and the time signature, 12/8, were clear musical references to the pastoral in Beethoven’s time. Throughout the movement, this opening motif—played by the violins, viola and cellos in the excerpt above—represents the brook itself. Beethoven will even double the number of notes, rocking back and forth between the original motif and a B-flat drone, to simulate a faster undercurrent underneath the stream. 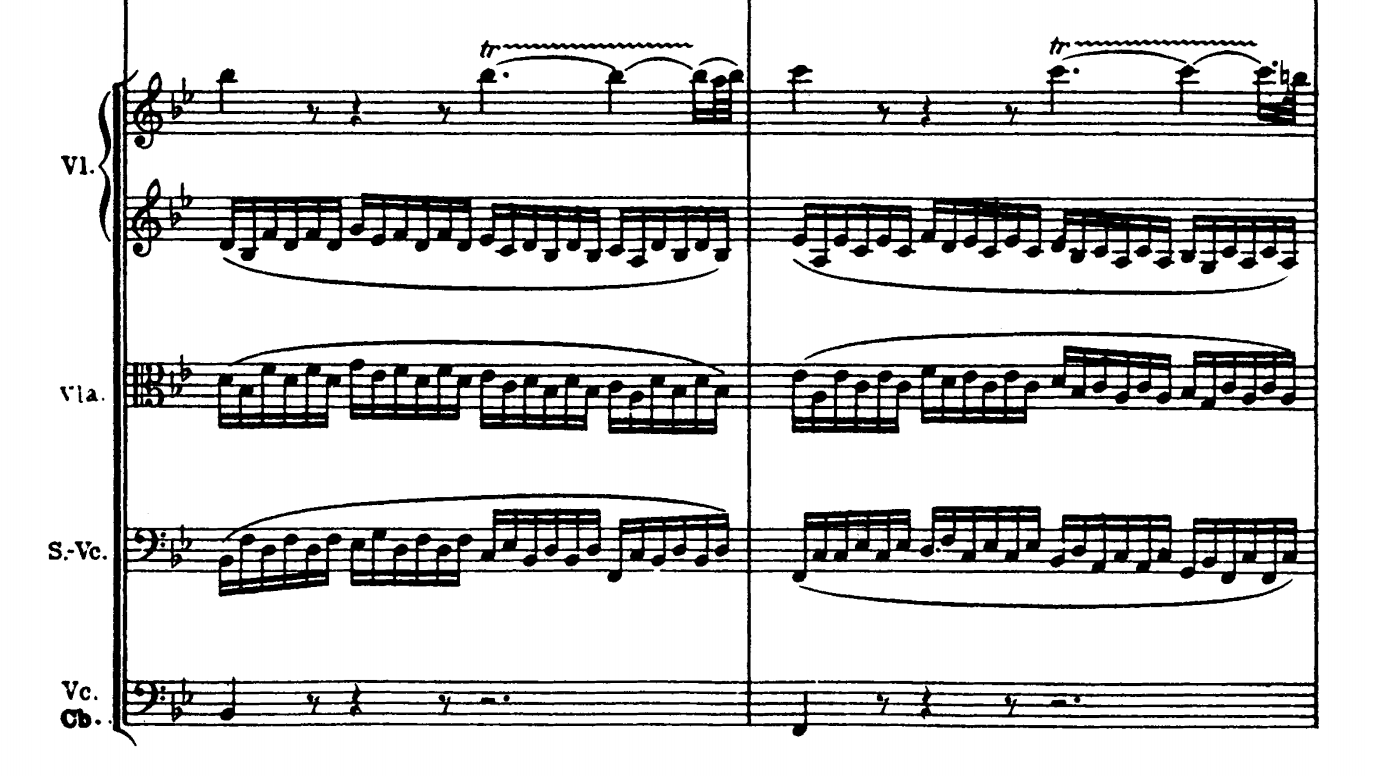 Later composers would go to greater lengths to capture birdsong and water in their music with increasing fidelity, but considering how much of Beethoven’s Symphony is based on symbolic representations of the emotions of being in nature, this simplified, literal passage of music is a great early example of the orchestra imitating sounds outside the concert hall.

Heinrich Ignaz Franz Biber is often cited as one of the most important violin virtuosi of the Baroque era. While many of his compositions expand the technical limits of violin playing at the time, his demanding and inventive compositions also represent some of the earliest examples of programmatic music in the classical repertoire.

The Sonata representativa is no exception in Biber’s catalogue of imaginative and challenging music. The work tasks the violin with imitating a variety of animal sounds. Various birds—some of which were also featured in Beethoven’s Sixth Symphony, frogs, and even a cat are catalogued in each of the sonatas’ inner movements—the opening and closing movements do more to establish the key and form of the sonata rather than its program. 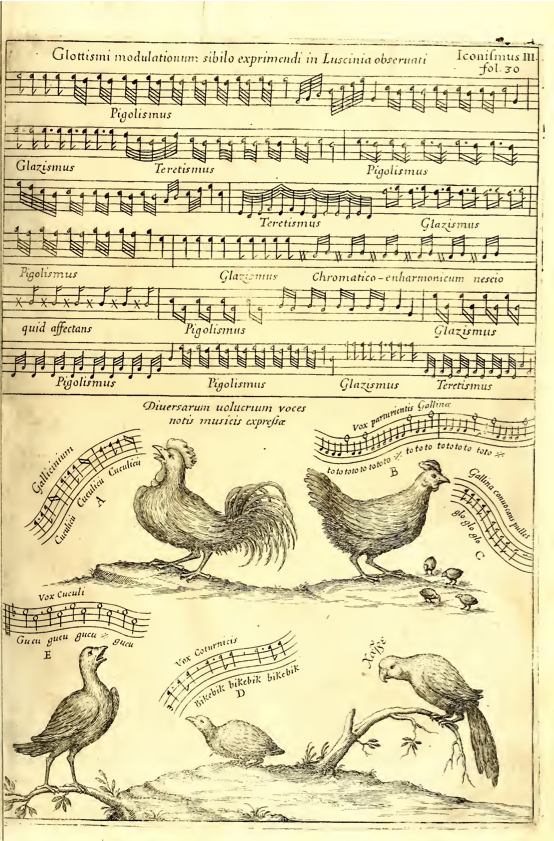 The inspiration for this work, and the musical material Biber uses to depict these animals, appears to come from Athanasius Kircher’s compendium of music theory texts, Musurgia Universalis [The Universal Musical Art]. The massive book attempted to compile the world’s knowledge of music theory, philosophy and anatomy from several authors into one volume. Of course, Kircher’s definition of “universal” is confined to Greco-Roman and Hebrew sacred music, and other musical traditions are only discussed in this context, if at all.

Musurgia Universalis contains some of the earliest notations of bird calls, including examples of cuckoo, rooster, hen, quail and a parrot, too. When Biber introduces these birds in his own work, he copies the transcriptions nearly verbatim and utilizes them as melodic material integrated into his regular Baroque forms. Instead of featuring copied quotations, the nightingale, frog and cat movements each utilize extended techniques from the violin to represent these animal sounds. The nightingale sings as florid improvisation, the frog croaks as unresolved dissonances, and the cat meows as a long glissando.

Biber lived and worked as an unparalleled master of the violin and used his skill to depict a variety of animals in his music. Sonata representativa is an early example of programmatic music emulating the sounds of nature. Biber’s imitation is mostly contained by Baroque forms and style, but those movements where he does break traditional rules of music theory and expand the technique of the violin offer a foundation for future explorations in contemporary music.

While many composers found ways of “representing” the sounds of birds, like Biber’s depiction of the nightingale in florid improvisation or Beethoven’s representation of the quail with a simple dotted rhythm in the oboe, none strove to achieve accuracy and faithful transcription until Olivier Messiaen. A composer of incredible aural gifts, with a novel understanding of harmony and rhythm among his peers, and an admiration for the intricately beautiful songs of birds, Messiaen was uniquely equipped to copy and replicate all manner of avian melodies.

His skill and devotion to ornithology is evident in the startling rhythmic accuracy, faithful gestural contours and the timbral specificity of his transcriptions. In transmitting these songs into his own musical compositions, Messiaen employs his experiments in harmony and rhythm to preserve many of these qualities of birdsong. He constantly changes meter to accommodate the precise rhythmic proportions of bird calls and invents new sonorities and progressions to capture the agile timbral shifts. Messiaen is discerning in what harmonies he uses to represent the inflections and qualities of bird song: The clear yet piercing timbres are played in simple ninths or sevenths between the hands while more strident and punctuated sounds might appear as dense and punchy chords.

Messiaen’s massive Catalogue d’Oiseaux features a diverse array of birdsongs spread across seven volumes. The catalogue is not just a collection of simple bird sketches, but paintings of entire avian ecosystems at various times of day. Each piece is a dialogue, almost an imaginary stage play, between birds of incredibly disparate characters and the natural landscape itself. Book III is a diptych celebrating the wonders and sounds of the night. While the first piece presents the night as a cacophonous and alien landscape, the second which you are about to hear, “L’Alouette Lulu,” is a reflection on the beauty and grace of the woodlark among the quiet stillness of the evening. In this movement, Messiaen paints the night in cool deep-colored chords, and suspends above it all the mysterious woodlark spinning its delicate song in liquid, chromatic descents. While the reverie is twice disturbed by the seemingly rude punctuation of the nightingale, the song of the woodlark returns and dissolves into the mystery and silence of the night.

Messiaen is sometimes cited as a “proto-spectralist,” a precursor to intense exercises in music theory explored by later composers: Gerard Grisey, Jean-Claude Risset and Tristan Murail. But Messiaen’s approach to depict the sounds of birds requires precision and unification of not only harmony, but rhythm and timbre as well. All of these elements work together with striking detail to create the impression of birds, but underlying that complexity, is a poetic spirit that keeps the Catalogue d’Oiseaux from being merely a list of notated birdsongs. The intricate and contemporary musical language allows the unique voices of Messiaen and his birds to sing.

Mr. Leger is an active arranger and composer of music for horn, wind quintet and other instrumentations, with the explicit goal of finding compositional genres and styles that have eluded these ensembles and finding a way to make this music adaptable, in hopes to enhance both the repertoire of the ensemble and to also breathe new life into the music.