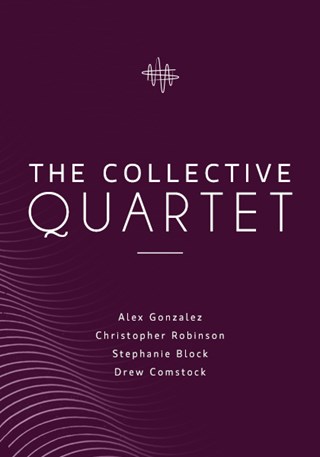 The in-person audience will be seated around the quartet in an immersive listening environment. Musicians will wear GoPro cameras for a unique observation experience by online audiences during the recital’s livestream on NWS’s Facebook page.

Mr. Gonzalez has been invited to numerous music festivals including the Sarasota, Bowdoin and Pacific Music Festivals, The Castleman Quartet Program, Britten-Pears Young Artist Program, Aspen Music Festival and School as a two-time fellowship recipient and Interlochen Arts Camp as an Emerson Scholar and concertmaster of the World Youth Symphony Orchestra. Recipient of the Achievement Award at the 16th annual Sphinx Competition, Mr. Gonzalez was also one of the recipients of the John Celentano Award for excellence in chamber music upon graduation from Eastman School of Music. He has received awards and support from the Links and Dorothy Richard Starling Foundations, and was recently named one of the recipients of the MPower Artist Grant from the Sphinx Organization.

Mr. Gonzalez performs regularly as a member of the Sphinx Virtuosi. He plays on a violin and bow generously on loan from the Maestro Foundation.

Mr. Robinson began studying the violin at age 10 with Gloria Spurlock, and later continued violin studies at the University of Cincinnati College-Conservatory of Music with Kurt Sassmannshaus, earning his bachelor of music degree in 2015. Most recently, he earned his master of music degree from the Cleveland Institute of Music studying under Joan Kwuon.

Passionate about teaching and community engagement, Mr. Robinson served as director of the Sassmannshaus Tradition from 2014-15. The Sassmannshaus Tradition is a beginning string program in the University of Cincinnati College-Conservatory of Music Pre-college where he also taught violin lessons, chamber music, ear training and music theory. He is also the founder and artistic director of the Giovani Vecchi Concert Series, which explores new ways to attract and expose younger audiences to classical music.

As an outdoorsman and Eagle Scout, Mr. Robinson enjoys cycling, backpacking, hiking, kayaking and canoeing. During the summer of 2015, he joined his family on a 221-mile backpacking trip on the John Muir Trail in the Sierra Nevada Mountains of California.

Stephanie Block is a first-year Viola Fellow at the New World Symphony. Praised by the Sarasota Observer as “exceptionally talented” and “a virtuosic performer,” she has performed as a soloist with several Chicago-area symphonies and recently gave the U.S. premiere of Alejandro Cardona’s Sweet Tijuana: Danzas Fronterizas for Viola and Orchestra with the New Juilliard Ensemble. Ms. Block has served as Principal Viola with the Juilliard Orchestra, Music Academy of the West Festival Orchestra and Sarasota Music Festival Orchestra. She also holds a gold medal from the Junior Division of the Fischoff National Chamber Music Competition. Ms. Block was recently selected to participate in the inaugural Keston MAX London Symphony Orchestra Fellowship through the Music Academy of the West and will be playing with the London Symphony in January 2019.

Ms. Block has worked with several renowned chamber musicians, including Michael Tree, Shmuel Ashkenasi and Ralph Kirshbaum, as well as the Brentano, Borromeo and Miró quartets. She has worked under conductors Gustavo Dudamel, Jaap van Zweden, Stéphane Denève, Elim Chan and Larry Rachleff. She also has a passion for jazz music and performed with Wynton Marsalis at Dizzy’s Jazz Club: Coca-Cola in New York as part of Daniel Chmielinski’s group Four by Four.

A survivor of the rare cancer Langerhans Cell Histiocytosis, Ms. Block organized a benefit concert to raise money for the Histiocytosis Association and is committed to continuing fundraising through her music. Outside of music, she is an accomplished runner and triathlete. She has been an age group winner in the Girls’ Best Friend and Chicago Supersprint Triathlons and a top prizewinner in the Chicago Triathlon.

A passionate chamber musician, Mr. Comstock has appeared in several summer festivals, such as le Domaine Forget, Toronto Summer Music Festival and the McGill International String Quartet Academy. In 2017, at Music by the Sea in Bamfield, British Columbia, the Hensel Quartet was joined by esteemed violist Steven Dann for the Brahms’ Second Viola Quintet. Mr. Comstock has played chamber music with cellist David Geringas, violinist Barry Shiffman and members of the New Orford String Quartet, and studied chamber music with Timothy Ying, Andre Roy, Borromeo String Quartet and members of the Alban Berg string quartet. Mr. Comstock has performed in master class for Laurence Lesser, Raphael Pidoux, Phillipe Muller and Raphael Wallfisch. In 2016, as a member of the Glenn Gould Ensemble, he collaborated with composer Osvaldo Golijov to present three of Mr. Golijov’s chamber works with Toronto’s Against the Grain Theatre Company.