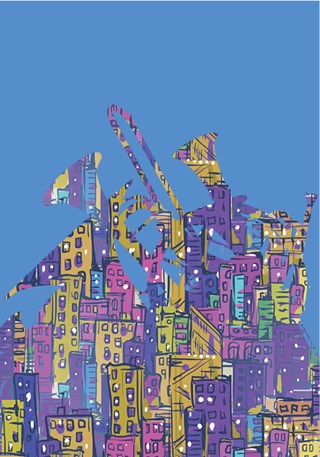 Victory Stride: The Orchestral Legacy of the Harlem Renaissance

Thomas Wilkins and Michael Tilson Thomas lead the New World Symphony in a performance of orchestra and chamber music by the great composers of the Harlem Renaissance. This concert will be preceded by a talk curated by FIU Professors Shawn Anthony Christian and Nathaniel Cadle. This presentation—drawn from books, magazines, photographs, and ephemera—explores how authors and visual and performing artists created a vision of Black modernity that extended beyond New York to become a national and global movement.

Victory Stride:
The Orchestral Legacy of the Harlem Renaissance

This performance includes a pre-concert talk curated by FIU Associate Professor Shawn Anthony Christian and Wolfsonian Public Humanities Lab fellow Nathaniel Cadle. This presentation—drawn from books, magazines, photographs and ephemera—explores how authors and visual and performing artists created a vision of Black modernity that extended beyond New York to become a national and global movement.

Thomas Wilkins is Principal Conductor of the Hollywood Bowl Orchestra; the Boston Symphony’s Artistic Advisor, Education and Community Engagement; Principal Guest Conductor of the Virginia Symphony; and holds Indiana University’s Henry A. Upper Chair of Orchestral Conducting established by the late Barbara and David Jacobs as part of that University’s “Matching the Promise Campaign.” He completed his long and successful tenure as Music Director of the Omaha Symphony at the close of the 2020-21 season. Other past positions have included resident conductor of the Detroit Symphony and Florida Orchestra (Tampa Bay) and associate conductor of the Richmond (VA) Symphony. He also has served on the music faculties of North Park University (Chicago), University of Tennessee in Chattanooga and Virginia Commonwealth University in Richmond.

Devoted to promoting a life-long enthusiasm for music, Mr. Wilkins brings energy and commitment to audiences of all ages. He is hailed as a master at communicating and connecting with audiences. Following his highly successful first season with the Boston Symphony, The Boston Globe named him among the “Best People and Ideas of 2011.”  In 2014 Mr. Wilkins received the prestigious “Outstanding Artist” award at the Nebraska Governor’s Arts Awards, for his significant contribution to music in the state, while in 2018 he received the Leonard Bernstein Lifetime Achievement Award for the Elevation of Music in Society conferred by Boston’s Longy School of Music.  In 2019 the Virginia Symphony bestowed Mr. Wilkins with their annual Dreamer Award.

During his conducting career, Mr. Wilkins has led orchestras throughout the United States, including the New York Philharmonic, Chicago Symphony, Los Angeles Philharmonic, Cincinnati Symphony and National Symphony.  Additionally, he has guest conducted the Philadelphia and Cleveland orchestras; the symphonies of Atlanta, Dallas, Houston, Baltimore, San Diego and Utah; and the Buffalo and Rochester philharmonics, as well as at the Grant Park Music Festival in Chicago.

Mr. Wilkins’ commitment to community has been demonstrated by his participation on several boards of directors, including the Greater Omaha Chamber of Commerce, Charles Drew Health Center (Omaha), Center Against Spouse Abuse in Tampa Bay, and Museum of Fine Arts as well as the Academy Preparatory Center, both in St. Petersburg, Florida. Currently he serves as chairman of the board for the Raymond James Charitable Endowment Fund and as national ambassador for the non-profit World Pediatric Project headquartered in Richmond, Virginia, which provides children throughout Central America and the Caribbean with critical surgical and diagnostic care.