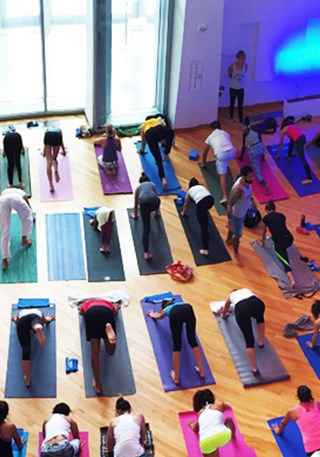 Start your New Year off right! Celebrate 2018 with a day devoted to mindfulness and music in the world-class New World Center Performance Hall. Retune and relax your body through the healing rhythms of live classical music, yoga, sound bowls and other healing instruments.

Wake up your senses with an energetic 60-minute morning vinyasa flow class led by Amy Dannheim from Tropical Vinyasa, Paula Walker from  Greenmonkey® Yoga, and Adrian Molina from Warrior Flow, accompanied by live performances by New World Symphony Fellows. Bring your mat, a towel and water.

Rest, relax and set the tone for your evening with a restorative 60-minute yoga class led by Jodi Carey from Flowintuit Yoga, accompanied by live performances by New World Symphony Fellows. Bring your mat, a towel and water.

Open up blocks and rebalance your energy with the vibrational power of the sound bowls and other sound healing instruments as they take center stage in a 40-minute sonic session led by Michelle Berlin from Tropical Vinyasa and Innergy Meditation. Bring your yoga mat, a pillow and water.

To bundle this class with the restorative class or sound healing session, please call the NWS Box Office at 305.673.3331.