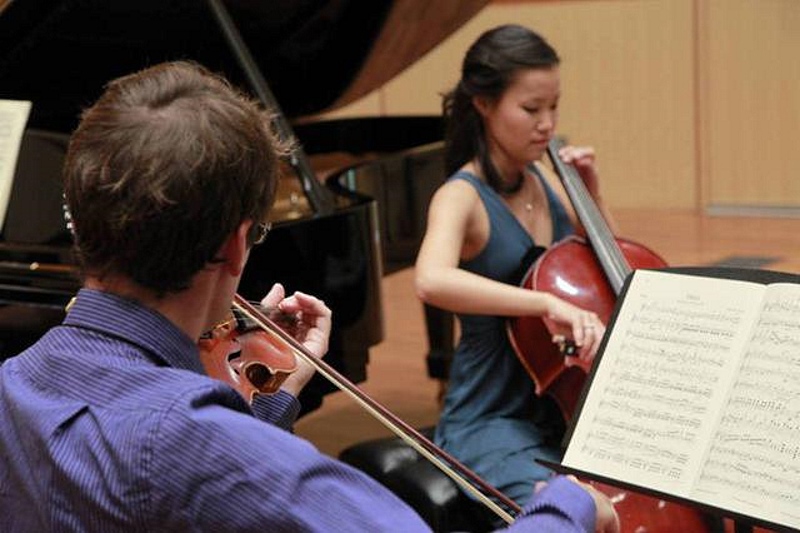 Last Friday February 12, the Deseret News newspaper in Salt Lake City UT got a jump on Valentine’s Day when they published an article entitled the self-explanatory “Making music together: Couples of Utah Symphony share their journeys of falling in love, playing in the same orchestra.” “Some of the couples met after being hired by the Utah Symphony, but for those who fell in love before, landing a spot in the same orchestra was a difficult task that required risk and sacrifice.”

Amazingly enough, or perhaps not, half of the individual orchestra members of the four couples profiled for the article are New World Symphony alumni. They are violinist Karen Wyatt (2005-2008), Principal Harp Louise Vickerman (1995-1996), and couple Anne Lee (cello 2009-2011) and Principal Second Claude Halter (violin 2008-2011) who met while at New World.

The Canton Symphony Orchestra (CSO) has named recent NWS alumnus Vivek Jayaraman (violin 2011-2015) its newest Concertmaster. The position became available upon the departure of Justine Lamb-Budge to the position of Associate Concertmaster of the Kansas City Symphony.  Auditions for CSO Concertmaster were held in September.

Jayaraman and Mirabai Weismehl (violin, 2001-2003) are both participants this year in the Concertmaster Academy at the Cleveland Institute of Music, studying with Cleveland Orchestra Concertmaster William Preucil. Weismehl is on sabbatical from her job as first violinist with the Orquestra de la Comunitat Valenciana in Valencia, Spain.

Matthew Way (double bass, 2005-2008) is now the Director of Development at the Talea Ensemble, a 20 piece ensemble based in New York that aims to build communities through innovative musical experiences, cultivating curious listeners, and engaging audiences in musical creativity and cultural exploration.

Way was previously Development Associate at the Juilliard School. He recently joined Kurt Muroki (double bass 1995-1996) to meet with the American Federation of Musicians (AFM) to discuss how the union can better position itself for communicative success with non-members and particularly student musicians.

Tarn Travers (2007-2010), violinist and assistant professor at the DePauw University School of Music, has joined the roster of artists who comprise Ensemble Dal Niente. The group is a 21-member Chicago-based contemporary music collective that presents and performs new music in ways that redefine the listening experience and advance the art form.

Travers had frequently performed with Ensemble Dal Niente as a guest performer. His first appearance as an official member of the Dal Niente roster will be the upcoming Hard Music, Hard Liquor program at 7:30 pm on Sunday, February 28 at Constellation as part of the Frequency Festival.

After that, Emma stayed in Asia to take a position with the Auck­land (New Zealand) Phil­har­mo­nia Orches­tra. She joins two other NWS alumni there.