From Clown to Cleric—Exploring the Bassoon 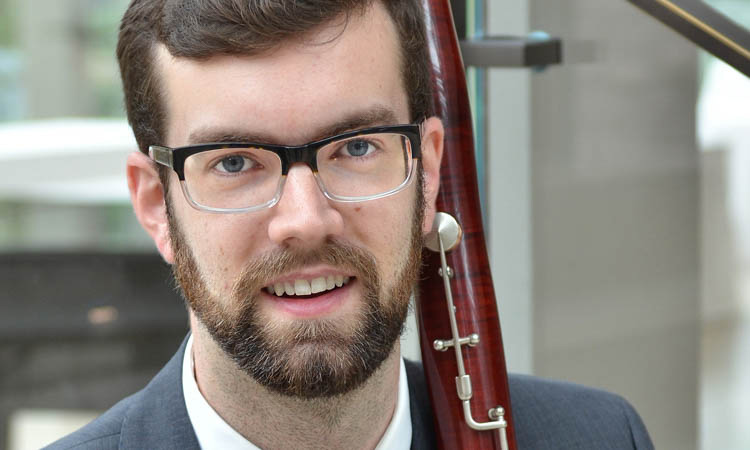 Darren Hicks, a third-year Bassoon Fellow from Nova Scotia, presented “From Clown to Cleric—Exploring the Bassoon” on December 12, seeking to combat the stereotypes that plague the bassoon and showcase the beauty of its characteristics. Below, Darren offers a fun recap of his presentation and how some audience members responded to his musical selections. 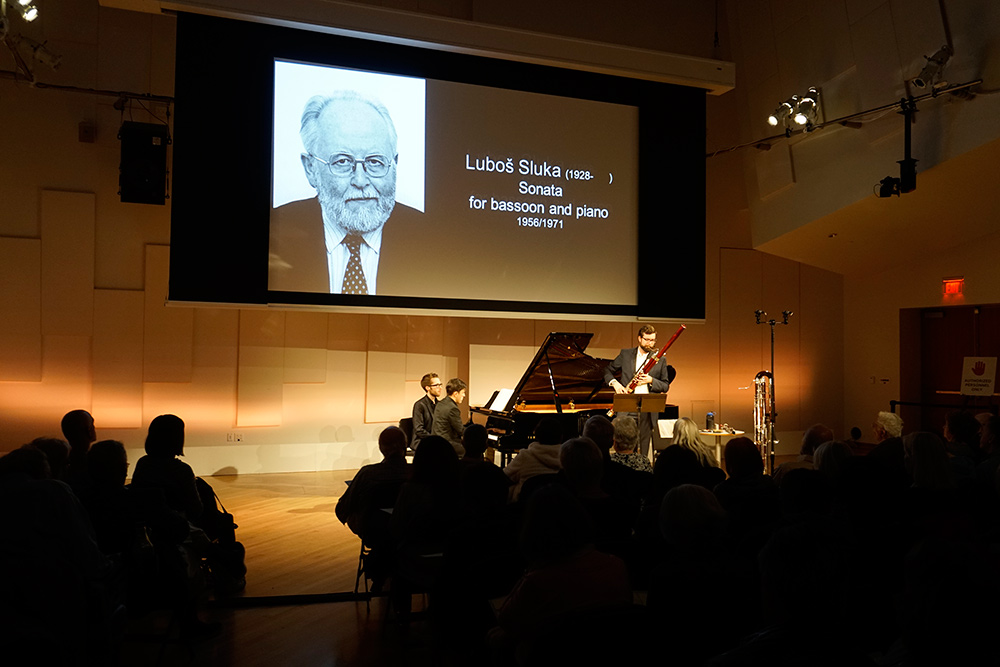 It was my pleasure to present an Inside the Music presentation all about the bassoon. I've been planning a concert like this for some time, having initially conceived the rough concept while attending graduate school at Yale University. Any time I can open up the world of the bassoon to an audience is a special occasion for me. The bassoon is very often the least well-known woodwind instrument, so I am trying my best to combat this. I want to shout from the rooftops the wonders of the bassoon! 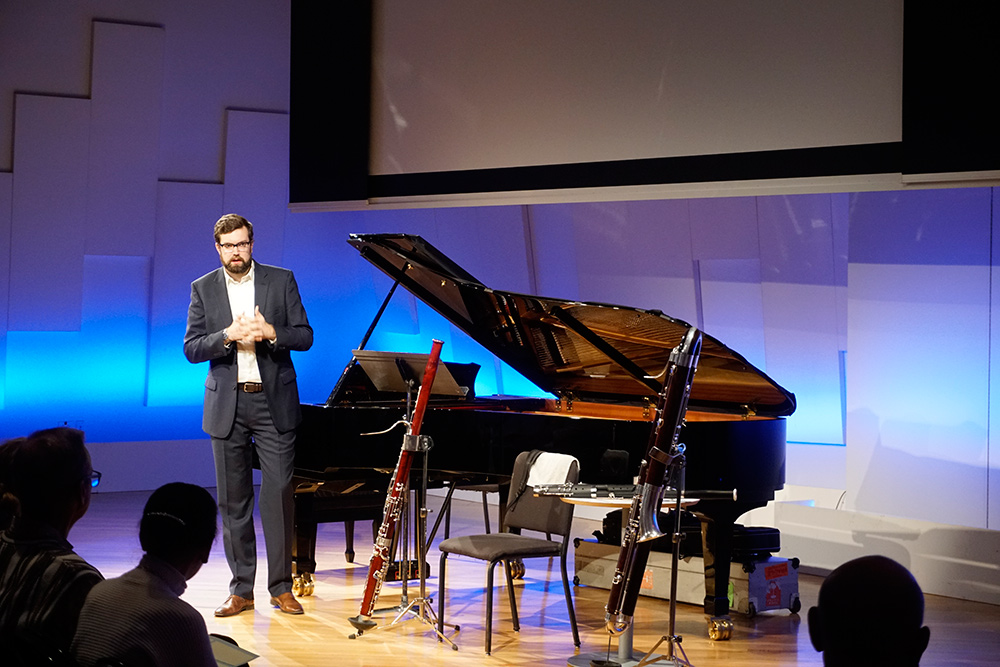 This concert gave me the opportunity to explore the idea of character in music with the bassoon being the medium. Often the bassoon is stereotyped into buffoonery and jolliness. These are just two of many qualities the bassoon can portray, but they are often the first instinct for many composers. My goal with the presentation was to expand the minds of the audience members and showcase just how many things or ideas the bassoon can represent. I used live performance in addition to video and audio elements, giving the audience a variety of contexts (solo bassoon, bassoon and piano, bassoon and full orchestra) that allowed for the character possibilities to be at their maximum. 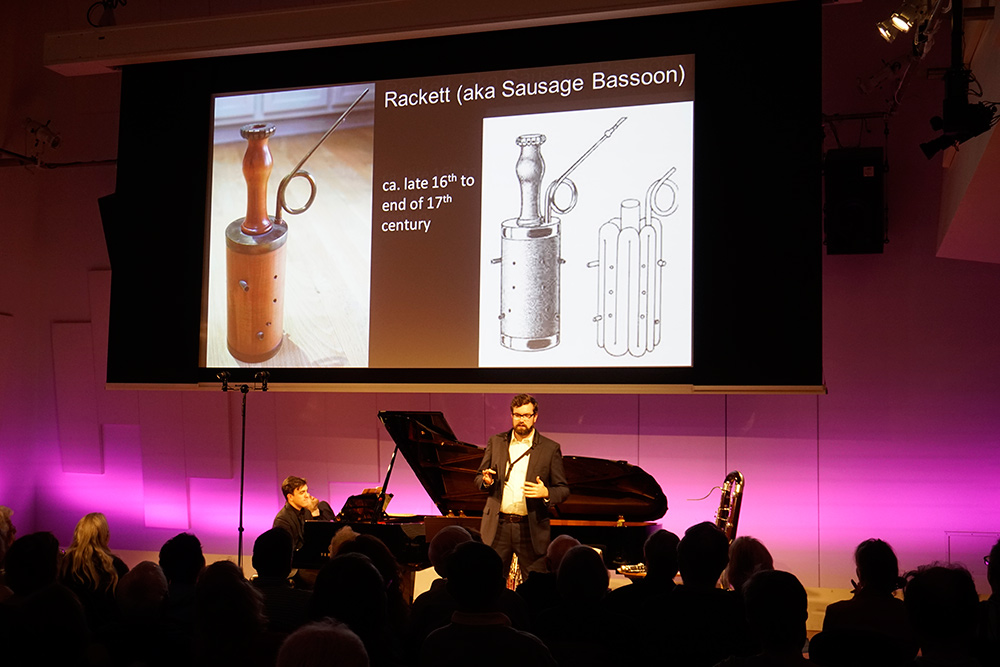 One of the biggest challenges with this concert was something that surprised me. I'm pretty comfortable talking in front of a crowd, but I prefer winging it over strict preparation. I like to keep my conversations with concert-goers and patrons relaxed and off-the-cuff. With this Inside the Music series, I had to make sure my speaking and playing portions seamlessly intertwined and that I didn't go over time. To be able to cram in as much information as I could without it being overwhelming or off-topic was the true challenge of this concert. I also had to find a way to keep the loose and relaxed conversational style while preparing exact notes and wording. Performing the pieces was the least of my worries! 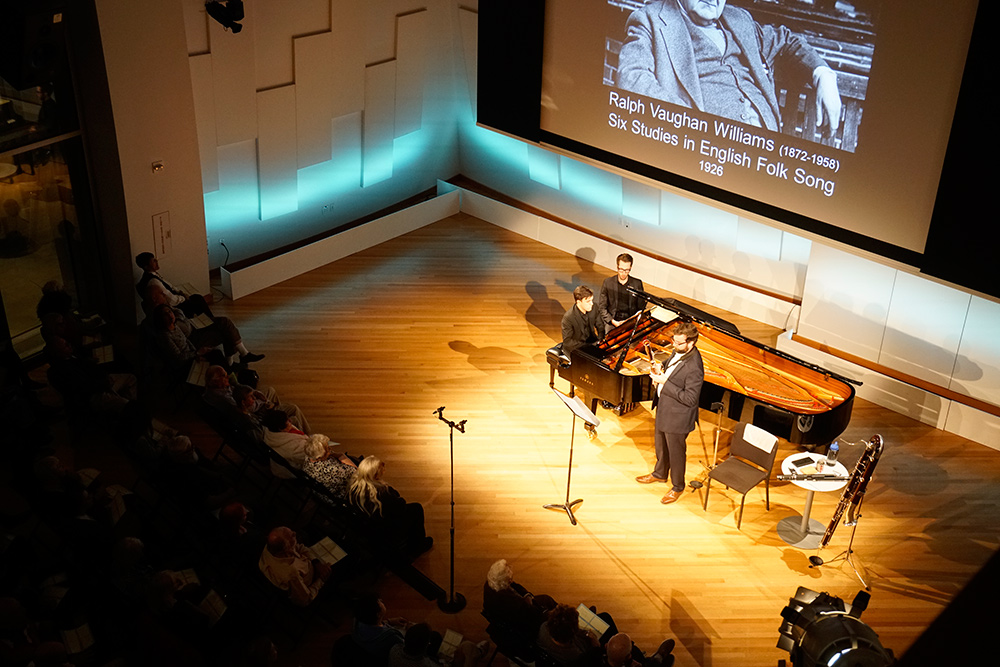 As an audience participation activity, I asked the audience to draw or write down some visual characterization of the music they were hearing. Having never presented this kind of interactive performance before, I was a little worried about the result. I am pleased to say the audience submitted some really wonderful character studies at the end of the concert. Here are a few of my favourites. 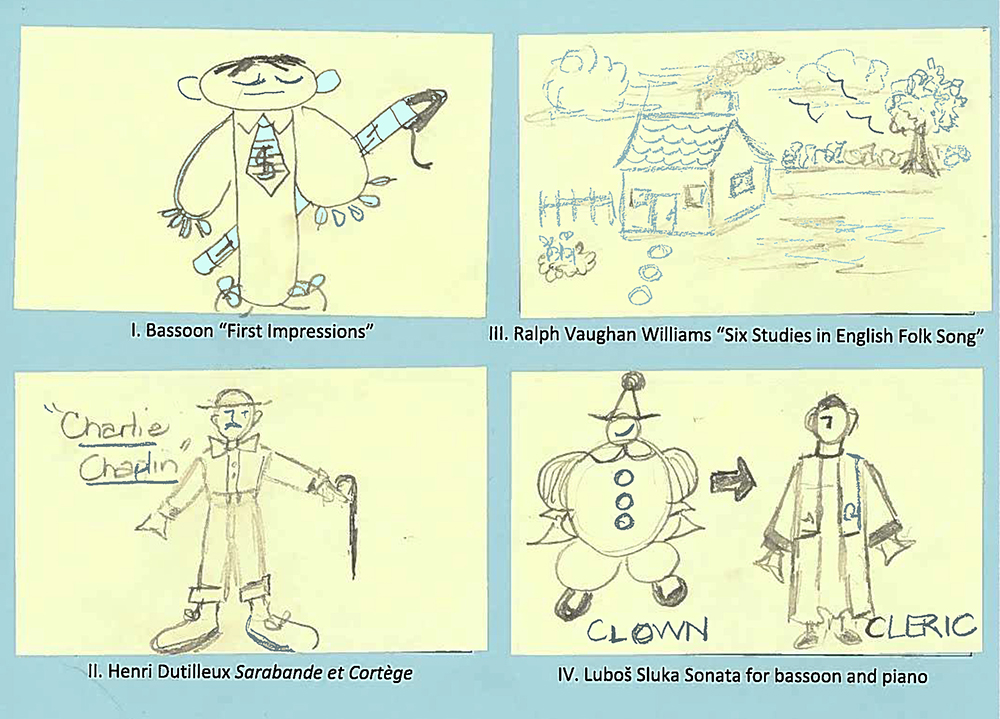 I like the drawings on this one. The Vaughan Williams is particularly evocative. I also like the visual representation of the concert's title "From Clown to Cleric." 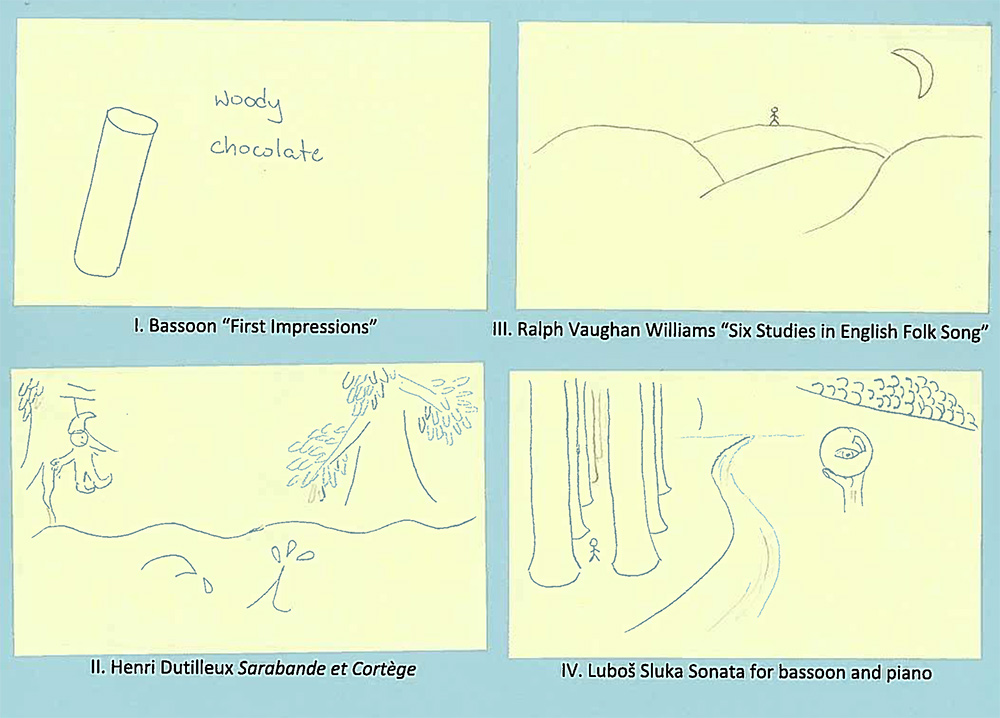 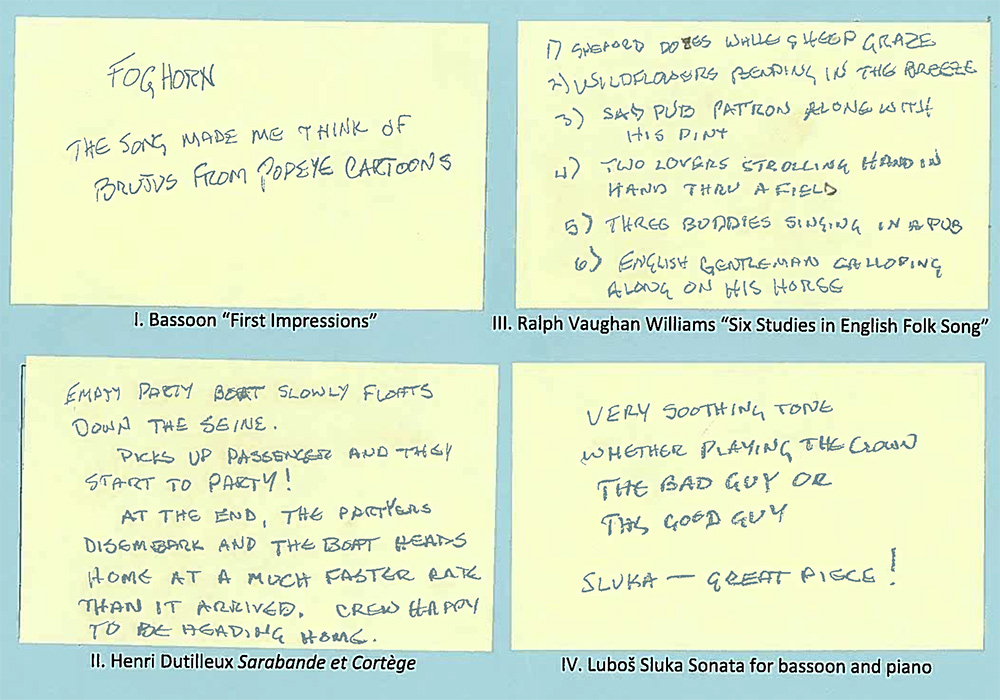 No drawings on this one, but I like the words they used to describe the characters they were envisioning. 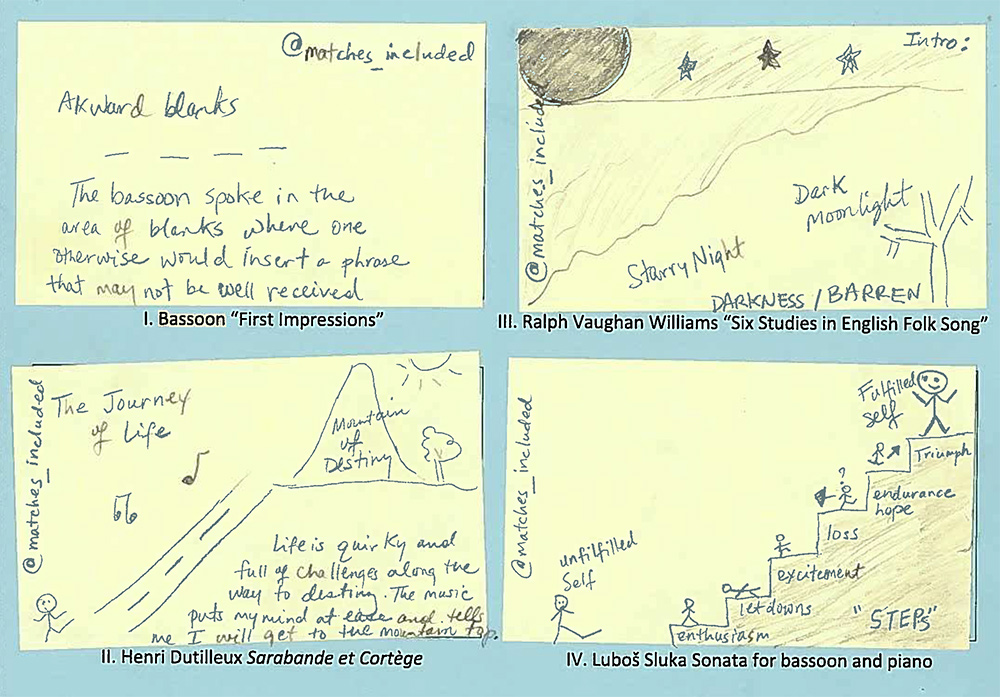 I love the combination of drawing and words in this one. The bottom right canvas for the Sluka Sonata is enticing.

Being on the other side of this concert I am now itching to do another. I know that I can only improve on what I presented on December 12, and I am grateful that New World Symphony gave me an opportunity to hone this part of my performance skills. Being able to present ideas and bring an audience along with you through an educational narrative are skills musicians need to have if our careers are to be successful. Having these platforms to present our ideas and test out some pilot projects are invaluable resources. I found this concert a fun and rewarding experience and I hope anyone who attended in-person or watched the live stream did as well. See you at the next one!

CATCH DARREN ON STAGE AGAIN FOR THE MARCH 24-25 CONCERTO SHOWCASE.

Each season, selected Fellows develop Inside the Music presentations as part of NWS’s Community Engagement commitment to adult education. These free one-hour presentations explore a variety of music topics and provide intimate views into the world of classical music and symphonic musicians. Audience participation is always encouraged with Q&A sessions after, or sometimes the presentation itself is interactive.

MARK YOUR CALENDARS: The next Inside the Music, “Conducting Appalachian Spring” with Violin Fellow Gregory Cardi, is Tuesday, March 20. Tickets available beginning February 20.