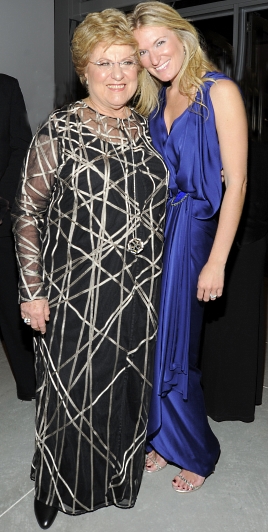 Profiled in this month’s Ocean Drive magazine as one of “8 Women Who Are Changing Miami for the Better,” Sarah Arison is a longtime member of the New World Symphony Board of Trustees. But there is much more to it than that simple statement would indicate.

Ms. Arison is the granddaughter of NWS co-founders Lin and Ted Arison. As such and on her own merits, she carries on the tradition of support for New World and for the other arts organizations that her grandparents founded in South Florida. Philanthropy and the arts are the keystones to Sarah Arison’s ethos. Amazingly, she has been a Board member of NWS since the 2005-2006 Season, when she was still an undergraduate student at Emory University in Atlanta.

That year, according to a New York Times article, Ms. Arison “was named to head the Arison Arts Foundation, a nonprofit organization created that same year by her grandmother to encourage arts across America, particularly in high schools and conservatories, and to ensure the longevity and expansion of the National Foundation for Advancement in the Arts [now the National YoungArts Foundation] and the New World Symphony, both of which her grandparents founded.” She continues as president and trustee at those organizations.

Ms. Arison is also a film producer. She is co-executive producer for the documentary, The First Monday in May, which opened at New York City’s Tribeca Film Festival last month.

Lin Arison continues to be a major presence in the arts in South Florida as well.

Earlier this month, the Miami Herald named her as one of three finalists for their Miami Visionaries Awards in the arts and culture category. The nominees were put to a vote by the public over the following week. Mrs. Arison was the winner by a landslide, garnering two-thirds of the votes.

Herald: "Philanthropist and author Lin Arison typically makes her contributions anonymously. As a result, few know how truly generous she has been to the Miami cultural community. Together, she and her late husband Ted, founder of Carnival Cruise Line, in the 1980s planted the seeds for Miami’s cultural renaissance, co-founding both the New World Symphony and YoungArts. Since his death, Lin has continued critical funding for YoungArts, the New World Symphony, Miami City Ballet, Miami Dade College and other organizations, and though the amounts are secret, those in the know put the total well over $100 million. Without her there would be no New World Symphony and Soundscape on Miami Beach or YoungArts campus on Biscayne Boulevard. Her efforts have won her a National Medal of Arts."

Posted in: In the News, Patrons