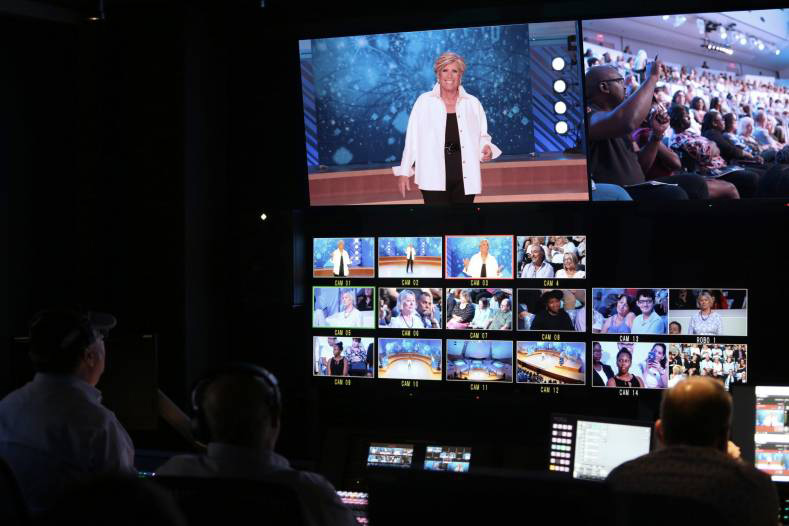 I have been in television and film for more than 20 years and have worked on hundreds of hours of scripted and documentary programs. Currently, I’m the Line Producer with the National Productions division of Twin Cities PBS in Saint Paul, MN. Our small team produces TV series and specials that air across the PBS system. We’ve also partnered with National Geographic Channel, the Smithsonian Channel, and multiple productions companies to create programming.

Suze Orman’s Ultimate Retirement Guide is the latest in a series of exceptionally successful Suze Orman membership specials for PBS, all produced by Twin Cities PBS. The new show will air nationally through March. As head of production for the special, I worked with Executive Producer Gerry Richman, who has collaborated with Orman on her PBS specials for over 20 years, to find a great location to record the program.

Suze was going to be in South Florida at the time of the taping, so I wanted to see if we could limit her travel by securing a local venue. I had started my career in the Miami area as a location scout for films, so I was pretty familiar with the area. I looked at large theater venues from Palm Beach to Miami, and in doing so discovered something I hadn’t come across many years ago: the fabulous New World Center. Built in 2011, the NWC is a world-class concert hall in Miami Beach designed in collaboration between the Center’s co-founder Michael Tilson Thomas and the renowned architect Frank Gehry. Gerry and I visited the theater on a scout, and we knew right away it would be a great location for Suze’s new special.

Devon Allen of David Agress and Associates designed the lighting in a way that made both the staging and the audience really pop – an important element necessary for capturing audience members in the program’s Q&A format.

The week before we took possession of the theater, NWC was finishing up the final touches on a complete overhaul of their video system – converting from HD to 4K, incorporating Hitachi SK-UHD4000 studio cameras, PTZ controls, a new switcher and a massive 2PB server. Suze Orman’s Ultimate Retirement Guide was the facility’s first television program captured using the new 4K system.

None of us had ever worked with the Hitachi SK-UHD4000, but the camera operators thought that they were easy to learn and the controls and connections easy to navigate. We used 10 Hitachi cameras for the two-hour production – thank goodness for the 2PB server. For broadcast, we were to deliver the program master in HD, but it was obvious that the Hitachi 4K record made the program look much better than had we used native HD capture.

The camera performance in varying light conditions was terrific. Lower light conditions in some portions of the audience could have proved problematic for many cameras – and, of course, we needed a lot of audience shots. The iris on the Hitachi SK-UHD4000 adjusts very quickly, so we could capture quality images even when shooting away from the main stage.

Abdiel Thorne was also instrumental in our ability to achieve a beautiful result. Abdiel is well known in the Miami production community because of his outstanding technical ability as a shader. He handled the color matching in the internal settings beforehand, but was also in the control room shading the feeds as we were recording the line cut. It would’ve made for a very nice live broadcast. His work reduced our need to do a whole lot of color gymnastics in post.

Ezra Gold, who edited Suze Orman’s Ultimate Retirement Guide, praised the quality of the video from the Hitachi cameras. “Not only did the video provide the detail and smooth, natural motion we wanted for the special,” he said, “but the larger frame 4K capture allowed me to reframe images during the edit for the HD deliverable without degrading the overall quality of the shots.” Gold also said the footage accurately represented the lighting and set colors, which were very important to the look of the show.

In addition to the multiple mounted Hitachi’s permanently installed in the theater, the technical consultant, David Stern, decided to place some additional rented cameras upstage and add a couple in the front of house. So not only was the entire video system new to the theater, we were now asking them to expand the system to integrate even more tech. It was a challenge Dan Slentz, the theater’s chief technologist, was happy to take on. I think he learned a lot about the capabilities of the new install, and he pulled it off.

As for the front of house additions, we needed Hitachi camera bodies so we could integrate them into the system to ensure they worked seamlessly with the other cameras already in place. I worked with Danny Stephens, a Hitachi sales rep in Pensacola, who procured the additional cameras we needed.

We rented a couple of PTZ HD units – the only non-Hitachi’s we used in the recording of this program, for the upstage POV cameras and recorded them locally to AJA Ki Pro recorders. This vantage point allowed us to establish a relationship shot between Suze on stage and the audience members during the Q&A. The main cameras – the ten SK-UHD4000’s -- were routed and run through the switcher. In total, we had 5 camera operators and two PTZ operators controlling all 12 cameras.

The footage was then transferred to four G-Drives for shipping back to Minnesota for post-finishing.

The result of all of our efforts is a high-quality program that set a new benchmark in video quality for Suze Orman’s PBS specials.