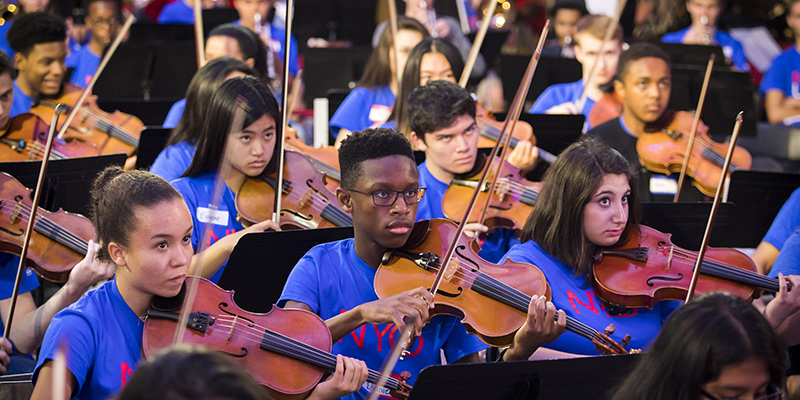 The New World Symphony is excited to welcome Carnegie Hall’s NYO2 program for a six-day residency in Summer 2018. Led by conductor Carlos Miguel Prieto, NYO2 musicians will work closely with NWS Fellows and alumni, as well as other professional players from top U.S. orchestras over two weeks of training at SUNY-Purchase College before traveling to Miami Beach for additional training, culminating in a concert at the New World Center. The performance at the New World Center will also be featured as a WALLCAST® concert in SoundScape Park with a later performance at Carnegie Hall. NYO2 will be joined onstage by world-renowned violinist Gil Shaham, NWS Fellows and NWS alumni for both concerts.

Created by Carnegie Hall’s Weill Music Institute in 2016, NYO2 is an intensive orchestral program for outstanding American instrumentalists between ages 14-17 that aims to bring greater diversity to the field of classical music. The program is free for all participants and talented instrumentalists from all 50 states who are U.S. citizens or permanent residents.

“Mentorship is fundamental to the passing of classical music traditions,” said Howard Herring, President and CEO of the New World Symphony. “New World Symphony Fellows and alumni will welcome their NYO2 colleagues for a week of rehearsal and performance. The technologically advanced New World Center is an ideal location for this training and for giving the musicians of NYO2 access to cutting edge digital distribution of their culminating performances. This will be a thrilling collaboration, one that will honor the past and shape the future of classical music.”

“We are thrilled to build on the success of NYO2’s launch in 2016 and the ensemble’s Carnegie Hall debut last season by working this summer with the New World Symphony, an organization dedicated to artist training and education at the highest level,” said Clive Gillinson, Carnegie Hall’s Executive and Artistic Director. “The opportunity to work with NWS Fellows and conductor Carlos Miguel Prieto will be inspiring for these students, giving them a chance to learn from innovative and talented young artists who are redefining what it means to be a professional musician in the 21st century.”

“Initiatives like NYO2 are invaluable for helping to ensure the artistic excellence of the next generation of orchestral musicians,” said NWS Co-Founder and Artistic Director Michael Tilson Thomas. “This is a goal we share at the New World Symphony as we prepare our Fellows to be leaders in the world of music.”