On Sunday, November 20 at 2:00 PM, the New World Symphony celebrates the Pulitzer Centennial, commemorating a century of the Pulitzer Prize, “100 Years of Excellence in Journalism and the Arts.” This unique chamber music concert “Taking the Prize: A Pulitzer Centennial Celebration” features three winners of the Pulitzer Prize for Music. The award is given “for distinguished musical composition by an American that has had its first performance or recording in the United States" and honors both the individual piece and its composer.

This concert is part of the Pulitzer Prize Centennial Campfires Initiative. The Pulitzer Prize Board launched a "national initiative to ignite broad engagement with the journalistic, literary and artistic values they represent." The project includes events and conversations across the country throughout the year about the “impact of journalism and the humanities on our lives and times, illuminating their value to public life today and imagining their future.”

THE CONCERT WILL ALSO BE STREAMED LIVE via MUSAIC - CLICK HERE TO WATCH.

The program begins with the first performance by NWS of both the composer and the work, Paul Moravec’s 2004 Pulitzer Prize winner Tempest Fantasy. It was premiered by the Trio Solisti and clarinet soloist David Krakauer on May 2, 2003 at the Morgan Library in New York City. Mr. Moravec found out about his win while arriving on vacation in Sicily, almost by accident–you can read about it in his interview in The New York Times from May 2004. At the same time, he was also interviewed for the faculty newsletter (pp. 5-7) at Adelphi University in New York, where he was head of the Music Department and where he still teaches. You can also listen to Moravec’s own short audio introduction to Tempest Fantasy.

Excitingly, Paul Moravec will be at the New World Symphony coaching the ensemble playing his piece during rehearsal, and he will speak from the stage at the performance.

The second piece on the afternoon’s program is the 2009 Pulitzer Prize winner Double Sextet by Steve Reich. The world premiere of the work was on March 26, 2008 at the University of Richmond in Virginia. It was composed in 2007 for the chamber ensemble eighth blackbird who performed it that night. The Washington Post reviewed that performance. And University of Richmond lauded Reich’s Pulitzer win two years later. National Public Radio also interviewed Reich and others about his prize and his work. In December 2013 eighth blackbird came to Miami Beach and performed the Double Sextet with the New World Symphony at a Sounds of the Times concert that was also enjoyed as a WALLCAST™ concert by an enthusiastic outdoor crowd

The final piece on the program is the well-known Suite from Appalachian Spring by Aaron Copland, winner of the 1945 Pulitzer Prize. Interestingly, while Reich and Moravec received a cash prize of $10,000, Copland’s was a mere $500. The prize for music had only been added two years prior. The music was commissioned as a ballet score for Martha Graham, and was first presented at the Library of Congress in Washington, D.C. on October 30, 1944. The New York Times reviewed what were to become both an enduringly popular musical work and classic dance performance. Another fortunate confluence of historic documentation reveals the detailed history of “The Making of Appalachian Spring.” The Library of Congress was not only the venue for the premiere, but is the repository for the papers of both Copland and Graham.

The 1944 performance was scored by Copland for a small ensemble and he arranged it as a suite for full orchestra the following year. In 1954 he orchestrated a full symphonic version of the complete ballet score. NWS first played the 1945 version after its Inaugural Season, at Big Sky Music Festival, Montana, in August 1988. NWS gave the first New York per­for­mance of the (mostly) com­plete bal­let ver­sion of Appalachian Spring at its Carnegie Hall debut on December 14, 1989. And the 1944 version was previously performed by NWS at chamber music concerts in May 2004 and February 2008, February 2010 mini-concerts and April 2013 Musicians' Forum. A review of the Carnegie Hall concert characterized NWS’s performance: “the best testimonial of the evening came in the extended silence after the last haunting note of Appalachian Spring slowly faded away. Anytime a performance is allowed to finish properly like that, without some eager clapper breaking the spell… you know something special has happened.”

This Pulitzer Prize musical celebration will be enhanced not only by the presence of composer Paul Moravec, but videos of Copland and Reich talking about each of their pieces will also be shown during the concert. 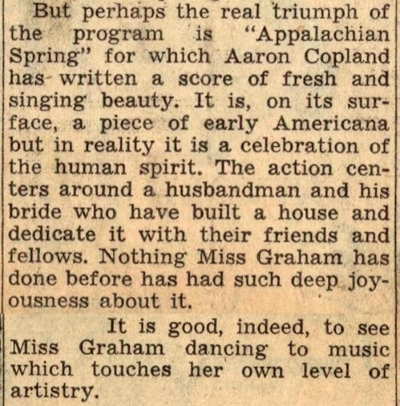 Posted in: Composers, Concerts, From The Archives