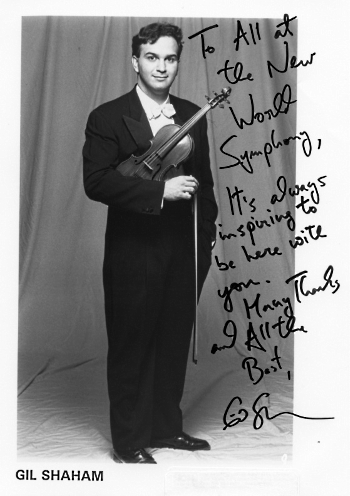 Guest Conductor Cristian Măcelaru leads the New World Symphony in three slightly different concerts this weekend, Friday through Sunday, at three different venues, in three cities. The maestro first appeared with NWS last season, conducting the String Orchestra concert of September 13, 2014. He also is returning to his roots, as a 2003 graduate of the University of Miami’s Frost School of Music.

On Friday January 8, at New World Center, the concert will also include Part I from The Garden of Cosmic Speculation by Michael Gandolfi, which was previously performed by NWS at the Pulse event of February 21, 2013.

Saturday night January 9, at the Arsht Center in Miami, NWS welcomes back guest violin soloist Gil Shaham, who will be performing Tchaikovsky’s Violin Concerto. Mr. Shaham first appeared with New World when he was only 19. In November 1990, he gave a series of performances with NWS and MTT, playing the Sibelius Violin Concerto. The newspaper review was entitled Shaham, Thomas create night of majestic music, and wrote “It was a performance of great definition and distinction.” Shaham made four other return visits to NWS from 2000 to 2012, led by MTT, performing violin concertos by Berg, William Schuman, Mendelssohn, and Prokofiev.

On Sunday January 10, New World Symphony returns to the Kravis Center in West Palm Beach for the first time since February 2011. NWS made their Kravis Center debut in November 2001 with a chamber ensemble concert, followed by a full orchestra concert there on January 16, 2002. The Tchaikovsky Violin Concerto will be performed by guest violinist Arnaud Sussman, making his NWS debut. Click here to buy tickets online.